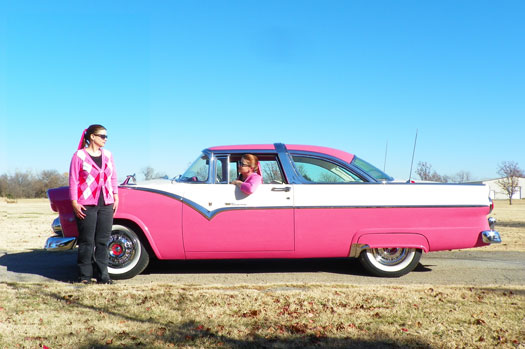 “I meant to buy a pink car,” my dad, Leon McLane, would say, when telling about that day in 1955 when he went to the Ford dealership to buy a new car. He saw The Crown, sitting on the floor of the dealership in raven black and snowshoe white, and had to have her.

“The Crown” was what Dad called his 1955 Ford Fairlane Crown Victoria “with Overdrive.”

I am Cherrilyn McLane, his daughter, and I would like to tell you the story of The Crown, who was a member of my family before I was a twinkle in my dad’s eye. In fact, if it weren’t for The Crown, well, I might not even be around.

Leon was “cruising Main” in The Crown, when both he and The Crown were young, and going slow beside a sidewalk when he first spotted the pretty blonde woman who would someday be his wife (and my mother). When he and Jimmie later married in downtown Oklahoma City in 1957, The Crown was the “get away” car at the wedding. I do believe that I came home from the hospital in The Crown in 19–well, the particular year is not important to the story. I do know that The Crown played a role in getting me to a hospital when my life depended on it. 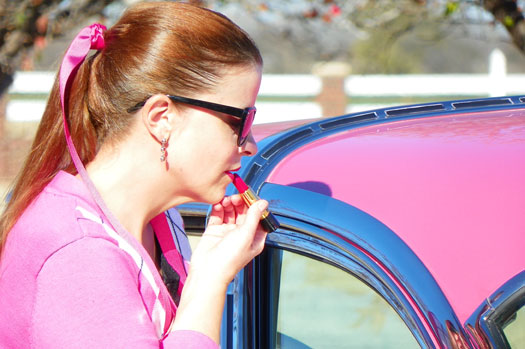 One evening my mother checked on infant me in my crib and saw that I had turned blue from lack of oxygen. Just as Jimmie started to panic, the front door opened and my dad returned from his electrician’s union meeting. Leon was quick to call the fire department and the response was nearly immediate. The fireman put an oxygen mask on my face so I could breathe and then he and my mom got in the back seat of The Crown. Leon jumped behind the wheel, speeding us to the hospital, with the fire truck as an escort.

I will pause here to tell you that, once, my dad was clocked by a police helicopter driving 140 mph in The Crown, while going downhill in Overdrive. He was very proud of that ticket, and I wish it had survived. So, most likely, he and The Crown got us to the hospital faster than any ambulance would have! The Crown helped save my life once–who knew that I would grow up to return the favor?

One of my favorite memories of being small was how fast I could jump from The Crown’s back seat to the front, where I could sit with my parents. I was very proud of this skill. On the holidays, we would go over the hills and through the woods to grandmother’s house in rural Oklahoma. When the day was done, I was always sleepy on the ride back home so I would bounce from the back seat to the front and lay down with my head pillowed on my dad’s leg as he drove and my legs in my mom’s lap. I would watch the big white steering wheel spinning over my head before the steady thrumming of the engine on the highway lulled me into sleep.

In 1969, I was riding in the front seat of The Crown when my mother executed an emergency maneuver that took us off the road. She threw her right arm out to catch me but I slid underneath and landed in a heap on the floorboard. The Crown came to a stop down an embankment. Mother and I were both okay. The Crown wasn’t hit, but her days on the road had come to an abrupt end. 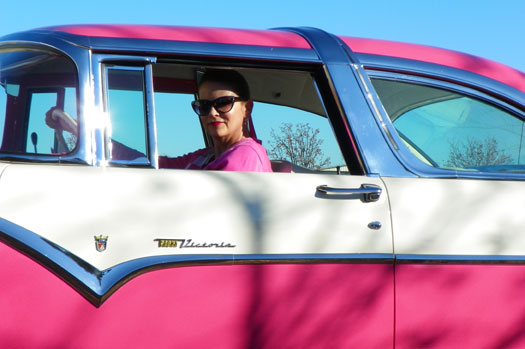 The Crown was first stored outside, under the trees, at my grandparent’s acreage on the outer edge of Oklahoma City. One of my uncles helped save her by spending a couple of hours on a summer afternoon putting her up on blocks. I’m sure Leon never meant to leave her so long but time has a way of passing. Around 1979, the acreage was sold, and Leon was in danger of losing The Crown. He took a good battery with him and in one afternoon got The Crown running. He then drove her IN REVERSE–the only way she would go–about 15 miles across the outskirts of Oklahoma City to our house. This time, he didn’t get a ticket.

She was parked outside our house for a time until Dad, who was a packrat, could unload the single car garage, roll The Crown inside, and then load everything back inside, entombing her. When I turned 16, he made a birthday gift of her to me, just as he had long promised. I’m sure he had plans to get her ready for me, but they never came to fruition. I spent many a wistful moment with her.

Many years later, after Leon had passed, I spent most Saturdays over two summers, with an uncle’s help, digging The Crown out of her sleeping spot. There was stuff on her, around her, under her, and in her. She had come to rest on Dad’s metal tool boxes. I remember how she sighed when I removed a stack of heavy floor tiles from her roof. Dad had long ago taken off her hood ornament, side mirrors, dual rear antennas, and windshield wipers to prevent them from being stolen. So, not only did we have to dig her out, we had to look in every box and every bag until every “Bit o’ Crown” was discovered. 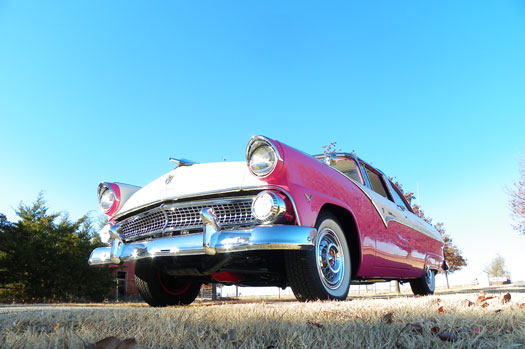 As we worked to free her from my parents’ old garage, we used a big refrigerator box to keep her hidden from view to avoid having her “disappear.” But, when my uncle jacked her up to remove the wheels so I could get new tires put on them, there was no good way to hide those distinctive afterburner tail lights. I remember a neighbor man driving by, backing up, and rubbernecking hard to see what was in that garage. Twenty minutes later, he and his whole family came over and approached me about “selling that old car.” I was on the porch and my uncle was around the corner, in the garage, freeing The Crown’s wheels. After the neighbor and his family left in defeat, my uncle popped his head around the corner and said, “I couldn’t hear everything you said to them, but I counted the word ‘mine’ at least seven times!”

I wouldn’t let my uncle put the wheels, with the new tires, on her until the evening before Moving Day, March 22, 2008, because I didn’t want to make it easy on anyone who might steal her. Even then, I left my daily driver, a Chevrolet Monte Carlo, with its nose to the big garage door overnight, standing guard until morning. The Chevy did a good job watching over the old Ford, and they were both safe and sound in the morning. After taking her off the jacks, we discovered that The Crown’s back wheels would only move a foot and half in either direction. Her drive shaft was missing, along with the pumpkin for her differential. The pinion gear was rotating and then hitting the inside edge of the remaining housing, stopping her from going very far in either direction. The tow truck driver was resourceful and used a 2 X 4 plank to “skip” her up the flatbed.

When we reached my home, The Crown was helped off the tow truck with a jack serving as her rear wheels and then car skates were slipped under all her wheels. I wanted to see her front whenever I came home so her helpers turned her around inside the garage, stopping mid-turn while she was crosswise for pictures, and then facing her outside. Then we had a party, complete with cake brought by my mom! Everyone took their time looking over The Crown, and I asked my mom how the Overdrive worked. “I don’t know, exactly,” said Jimmie, “except that when I was drag racing, I put it in Overdrive and I was GONE!” A startled expression crossed her face, and she grinned, realizing that she had just told a story on herself to her daughter. I had always known that Leon had drag-raced in The Crown but did not know that Mom had been a racer, too! 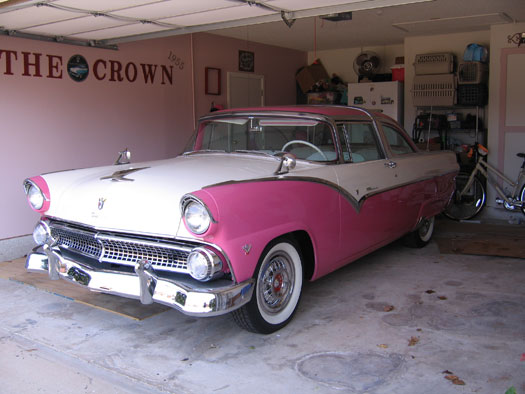 The next morning, when I got up, I thought something smelled strange but familiar. It did not smell good. In fact, it smelled like “funky old garage” in my house. “Oh, no,” I realized, “It’s The Crown–she reeks!” I did some online research and discovered that this was not an uncommon issue with cars that have been in storage for many years. I bought a couple of odor-neutralizing “bombs” and set them off in the garage. When the bombs finished their work, The Crown smelled like 3,300 pounds of pink bubble gum! It was a good trade and the sweet smell faded out over the next two weeks.

Now, I had her home but what would become of her? I had a dream but no idea where to begin. Wondering if anyone else was as crazy about a car as I was about The Crown, I did a random search on the internet for “Crown Victoria Club” and was delighted to discover the “Crown Victoria Association.” I had found a place to belong and begin.

Find out the rest of the story under Page Two News...