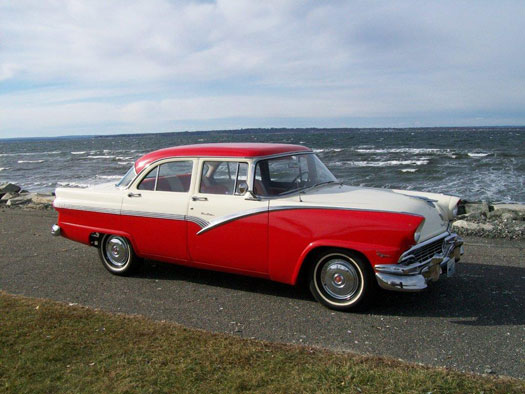 In the early ‘60’s I worked as a valet parking attendant at a private country club. I was a high school senior driving a ’56 red and white four door Town Sedan which I had inherited from and named after my great aunt Gertrude. There were three club members with ’56 T-birds. Oh how I loved parking those Birds, even if it was “necessary” for me to take the long way around a couple of blocks to find a space in the lot which was only a hundred yards from the club entrance. I promised myself that some day I would own a black ’56 Bird with overdrive.

In 2003 a running injury forced me to look for a new hobby. Now I was a mechanical engineer who loved cars. Maybe now was the time for my first collector car, a ’56 Bird, of course. I started checking EBay. Wow, it was going to cost me at least $25,000 to get a Bird. How could I be sure that old cars could become my passion to replace marathon running? But wait, there was a great looking red and white Town Sedan just like my old Gertrude whom I gave up when I went off to college. After 40 years I still remembered her fondly. Maybe this would be the way to find out if tinkering with old Fords would be fun without having to make a huge financial investment.

After a plane ticket to Orlando, a certified check for $10,000, and a 1300 mile drive back to Rhode Island (see FoMoCo Times August 2010) I had a new Gertrude in my garage. This Gertrude was also a four door, 292, three speed overdrive. She had a fresh new paint job, detailed undercarriage, and magnificent custom red tweed interior.
Unfortunately her mechanicals were not up to the same high standards, but upgrading them was going to be the fun part.

The best day of every week was the day I drove Gertrude the 67 miles to work. Year round we cruised together north along Narragansett Bay, into overdrive for the interstate dash into and across Providence, back into third cruising through rural western Rhode Island, into the hills of eastern Connecticut, and on to work in Massachusetts. We never did cruises or car shows, we just enjoyed our weekly drives together listening to the mellow sound of the y-block trough the Flowmasters.

This was serendipity, but what about the itch for ’56 Bird? It was still there. If Gertrude was this fine, wouldn’t the Bird be even better? In May of 2009 I found the black beauty I had dreamed of on EBay only 40 miles away. I only had the space, time, and money for one girl. Gertrude had to go.

Gertrude and I became regular at the cruise nights and car shows from Newport to Boston and Providence to Hartford with for sale signs and flyers touting all Gertrude’s virtues. Who knew that there were dozens of events a month within 50 miles from home? Gertrude was modestly priced at $12,500 considering that I had invested close to $25,000 and dozens of hours of labor to make her what she was. Everywhere the response was the same. “What a beauty. ’56 is it? I used to have one just like it. Great car but no one wants a four door. You should have gotten a Crown Vic. Too bad it’s not an automatic, how can you talk on the cell and shift.” I slowly dropped the asking price to $8,500 as May stretched out to July. Still there was not even one offer.

Finally out of desperation I took Gertrude to a classic car auction in a tent at the local casino. This was my first auction experience. I found the friendly auctioneer was my new “buddy”. He practically guaranteed that Gertrude would bring $15,000, but out of caution I set a reserve of $8,500. Gertrude went on the block. I was terrified. The bidding stalled at $5,600. My new “buddy” urged me to drop the reserve. He knew the audience. He had signals from his shills on the floor that there were bidders who would top $10,000. “Going once, going twice” and Gertrude was sold for $5,700. I was shocked, stunned! Hot tears of anger filled my eyes at the auctioneer’s betrayal and my own stupidity. What had I done? Gertrude was gone! For $5,700? Was this the reward for six years of Gertrude’s fun and friendship? I quickly slunk away from the auction. I could not bear to meet the new owner.

Sure, I bought the black ’56 Bird. She was a great looker, low, sleek, 312 y- block, standard shift with overdrive. Yes she was sassy with the floor shift, skirts, portholes, and continental kit. But she was not Gertrude. I missed Gertrude’s smooth plush ride, easy entry (how can you get into a T-Bird with the top up when you are 67 ?), high comfortable seat, light and airy headroom, panoramic view through all the glass (what can you see trough a porthole?), Flowmaster rumble, and quicker acceleration. My weekly commutes through the country were not the same. I missed Gertrude!

Then in May of 2011, two years later I saw a red and white ’56 Town Sedan, 3 gold deuces, three speed with overdrive, and a red tweed interior listed on EBay with a Rhode Island address. Could it be? Yes, it had to be Gertrude.

I convinced the seller that I was the previous owner by virtue of the lucky 1956 wheat cent penny I forgot in Gertrude’s ash tray and the hidden toggle switch for the electric fuel pump. He gave me directions to his house and there was Gertrude! She was covered with leaves and streaked with dirt, but definitely Gertrude. I gave the man $7,500 and Gertrude was mine again.

She cleaned up fine, just a little worse for her two years outside. We are enjoying our commutes trough the countryside while the Bird languishes in a rental garage. I have learned that there is no car like your first car. Gertrude seems to have forgiven me. We will not part again.