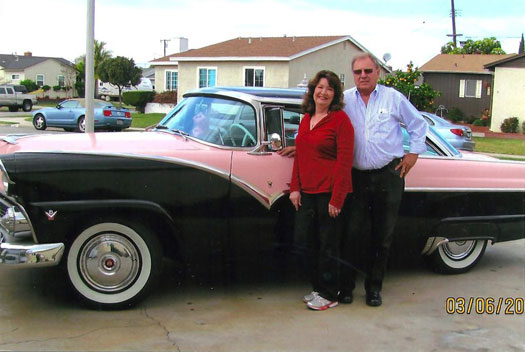 In the early 1990’s, we traveled to my hometown of Wishek, North Dakota for a visit. We intended to buy a 1963 Chevy Convertible that had been restored by Mike, owner of Martel’s Auto Salvage, but it had been sold. Mike told us about a 1955 Ford Crown Victoria stored in a barn not far from town. He said he would check out for us. I had a 1955 Ford Customline stick shift with overdrive in my late teens, so I was interested. Mike, a long time friend, called us the next morning and said he had picked up the car and it was in his shop. We went to see it and I immediately recognized the pink and black Crown.

As a young boy early 1955, I remembered the car being new and cruising around town. I wanted one like that so bad, but at my age and the $2,800.00 price tag, it was out of the question. So, I did the next best thing. I painted my 1946 Chevy pink & black with a paintbrush. It seemed like a great idea at the time. However, in a small town I may as well have installed radar in it, I could not hide from anyone. I did survive that ordeal for a few months, than I decided to paint it all black. That was much better, I finally had some privacy.

Back to the ‘55, we bought the Crown from Mike and shipped it to our home in Lakewood, CA. It sat in our garage for another six to seven years untouched, due to the lack of funds.

By late 1999, we started with a complete engine rebuild and by 2008 managed to go through the complete drive train and suspension.

By early 2009, we shipped the car to Mobridge, South Dakota where it underwent a complete body restoration down to the bare metal.

Derry’s Auto Restoration in Mobridge did the bodywork. This took through late 2010 due to some time off for Derry because of health issues.

In late Oct 2010 we traveled to South Dakota to pick up the car and bring it back to California. When we arrived at the restoration shop, Derry had it parked out front and it looked great!! Just as I had remembered it. Since that time we have entered the car in a number of shows around our area. Our four-year-old Granddaughter insists on attending the shows with us. She loves the color of the car and dresses to match. 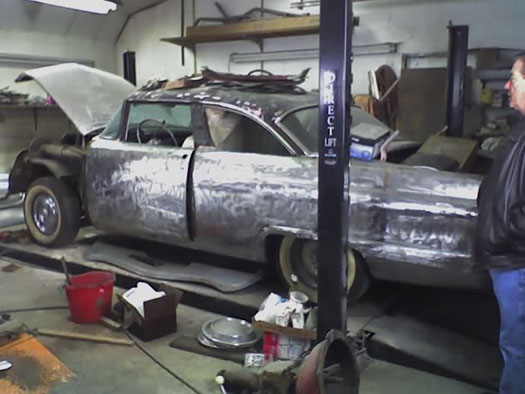 During the Summer Stampede Show in August of 2012, we received an award for the “Top 40 Cars”.

The car is all original with the exception of radial tires and a 12-volt electrical system.

Thank you to FO MO CO Times and CVA for the opportunity to share our story and for your efforts in keeping the ‘55 Era alive.