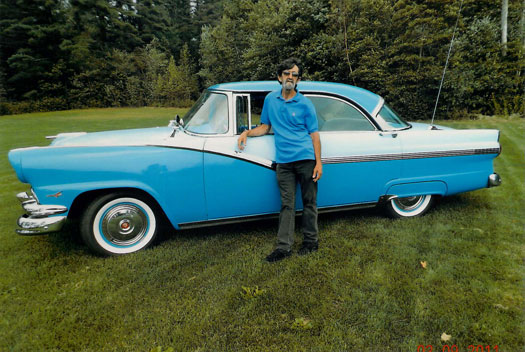 Well, I suppose you are dying to know how this project came about. My business partner Jim Rock has a yellow ‘56 Ford Convertible. He kept saying he would let me drive it. This was a few years ago and it just never happened. The sure guarantee of driving 56 Ford, I thought, was to purchase one! My preference was a hard top with automatic transmission. The color was flexible. However, it was just a thought at that point. Yet, I admired many of the cars at the CVA national conventions, which increased my desire to own a ‘56 Ford even more.

Meanwhile Jim’s convertible needed some specialty work and Don Stickler referred me to Steve Rocke of Canaan New Hampshire to help out. He lived 143 miles from where we live. Steve had built cars for Dick Metz.

Columbus Day weekend of 2006 arrived and we both planned to see Steve Rocke with Jim’s car. We noticed upon arriving that there was a ‘56 Ford for sale in Steve's yard. The color was right (Diamond blue and Bermuda blue). It was automatic and a hardtop. The poor girl was sitting there as if to say “Please buy me!” I decided that this was the car I wanted. Thus began a long money pit restoration job. The date was October 2006. After finding out that Steve had worked on the dream cars of Dick Metz, Steve was the one I wanted to restore the car. Seeing that I know nothing mechanically about ‘56 Fords, except how to check the oil, fill the gas tank, and turn the key in the ignition, Steve would be doing virtually everything. My job was to write checks, more checks, and more checks!

Some of the headaches (and every restoration project has them) I will describe for your enjoyment. You may not want to restore a car--ever after reading this (not in Massachusetts anyway)

The car was purchased from a lawyer who lost all the paperwork. Yes, he lost the papers on the car. I sure will never recommend his services. Fortunately it wasn't too difficult to obtain a title in New Hampshire without a paper trail. Good ole New Hampshire. I haven't been arrested yet!

Another sticky problem was that nobody could supply a headliner that fit. One was finally correctly made by manufacturer in Oklahoma. That was after the first headliner was accidentally destroyed trying to make it fit! Ouch!! Thanks Steve for the replacement!

Next was the upholstery issue. The person selected to do the job failed to produce the completed seats. The unfinished work was retrieved to bring in to a second shop. However, the owner of the first shop was unable to find one of the seat covers! He never did find it, so another had to be ordered, at extra expense. Somebody out there must have that ‘56 Victoria seat cover in his project car.

The registry was another mess. It cost a whopping $426 to register the car with regular plates!! This included a Massachusetts sales tax of $250 on the blue book purchase price for a rust bucket. Then there was a $126 fine for owning it for three years without registering it, and a $50 plate fee, etc. The lady at the registry could not get her computer to accept the vehicle description, a 1956 Ford Victoria four-door. Finally, after 10 minutes of consultations with fellow employees, it was suggested to add the word “hardtop”. Success! It was printed on the title in the first place, folks. Nobody ever looked at that (DUH!).

Well the Massachusetts officials have a tendency to complain that many Bay Staters register their vehicles in New Hampshire and they still can't figure out the reason yet!! Can anyone guess why? 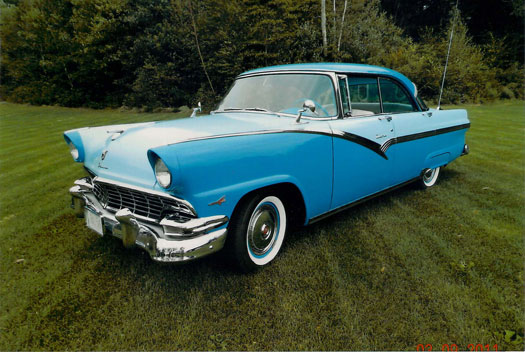 AT LAST!! After 4+ years, she is finished and so was my 401(k)! My future vanity plates will definitely and hopefully if available read “MYIRA”. Before that happens, a notarized affidavit saying that the car is at least 25-year-old years old is needed. More work! Nothing comes easy. If I do get the correct plates, and you see it, you will also see a bucket for donations to refurbish my battered IRA.

Meanwhile I have barely yet to drive a ‘56 Ford! I bet I'm the first one to have a finished 1956 Ford and hardly ever driven it yet! See you next year at the convention.