I never thought of owning a skyliner, much less a 1954 Dealer Demonstrator with a glass hood, as well as glass top to go along with the 1955 and 1956 Crowns my wife wrote the CVA about. When I read the ad about a barn find, I couldn't believe it. "New barn find" 1954 Crestline Skyview, H/T, V8, AT, PS, PW and power seat, in same family since new. After calling the number to discuss the car, I asked when I could see it. The man said he was having some work done on the brakes so it could be driven. He took my number and promised to call. I wanted to be the first to see it. He assured me that he would call.

About 3 weeks later he called. I was the 12th call he made. It was short notice. I was given only 3 or 4 days to prepare for the 6-hour drive, get trailer ready, and have cash for purchase. I still had 2 days on the road before I could get home! On Saturday evening I headed North with the intention of being the first to arrive and purchase the 1954 Skyliner. The agreed time to meet was 8 am, but I was there at 6:30 am, anxiously watching the clock. At 8am, I called to let him know I had arrived. I was the first one there to see "her." 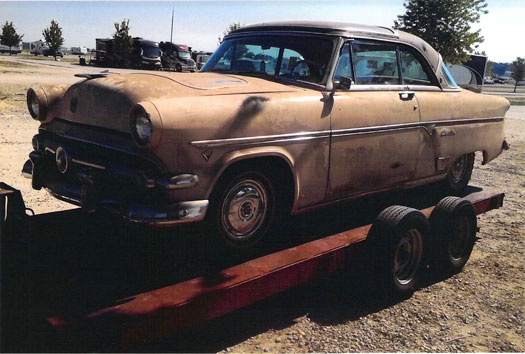 After introductions and handshakes, I started the car. He said he had driven it about 6 miles but thought I should drive it myself. I just turned the car off and ask "how much to buy the car right now?" He told me he had received 68 calls on the car, so he wanted the ad price. I handed him the cash without another thought and loaded her up. While fastening the car to the trailer a man from West Virginia drove up in a restored 1961 Falcon hoping to trade for the 1954. I explained I had just bought it! He did sell the Falcon and find a ride home to WV, but it was my lucky day, the 1954 Skyliner was mine.

I arrived home just in time to unload my "jewel", pack my truck and leave for the week. My lovely wife had packed my clothes, cooler and given Griffin, the 80 lb. boxer a bath. Griffin travels with me in the truck as my guard dog/co-driver.

We drove off leaving a dirty, sad looking barn find in the driveway. While we headed to Chicago Becky got busy working on my new prize. When I got to Chicago she called and said to check for a text message with photo. My barn find really shined! 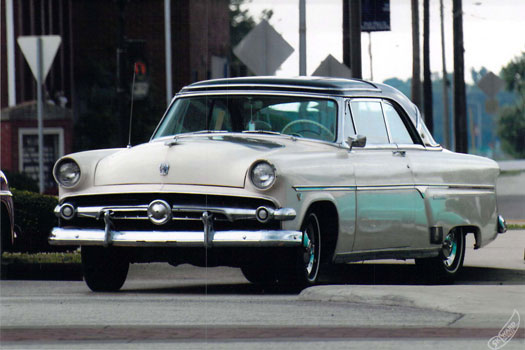 The next day my brother Joe waxed and buffed her, cleaned under the hood and got her ready to show off. After some minor mechanical fine-tuning, I took her out for her first car show the Saturday after purchase. The "Barn Find" came home with a trophy. 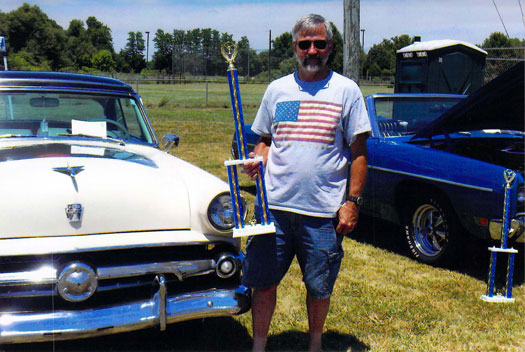 The next weekend Charlie, my son arranged to have a professional photographer photograph all three of my jewels- the 1954 Skyliner, 1955 and 1956 Crown Vics at the local Hodgenville Cruise-in. As Lincoln looked on, I felt like the Triple Crown Winner for this year. When we looked at the photos, we noticed Ashley of Skyward Photography had taken a picture of the 1956 Crown Vic with the reflection of my mother in the bumper. Both my wife and mother share the name Rebecca, so I felt like royalty standing between my 2 Rebecca's with my Triple Crown of Fords.

I am thankful to my wife for cleaning the barn find up, my brother for the hard work cleaning, waxing, buffing and mechanic work, and especially my friend, Tony for the quick cash funding to purchase the car on short notice. But mostly I am thankful to God for all the blessings in my life; my family, friends, good health, the ability to work and all I have.