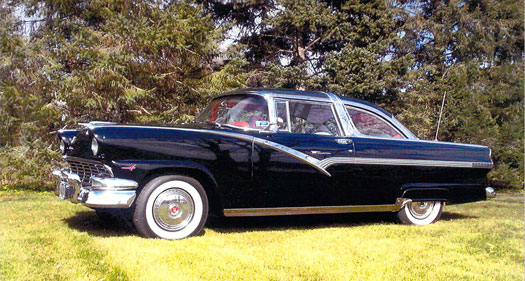 We are Lorraine and Russell Karnik from Fort Atkinson and this is our life story of our cars. We have been very happily married for 43 years and we have 4 grown children and 10 grandchildren.

It all started with my first car that was a 56 Ford two-door sedan. Lorraine was my girlfriend at the time and later she became my wife. When we were going together I worked at a Shell gas station. I had this car for 2 years and then I had a bad accident with the car and it was totaled, so there went my car. My second 56 Ford was a 2 door Victoria hardtop. I painted this car and put a 312 engine in it that I built up, bored 90 over 11 & V2 to 1 piston, high performance cam, 3 deuces, 3-speed on the floor and 4:11 gears in the rear end. It was a very fast car. I had this car for 2 years and sold it. I had found a 56 Ford Glass Top but by the time I got there the guy had already sold it. In the meantime, I got married to Lorraine and we raised our family of 4 children and had built our home. I put my dream on hold, but in the back of my mind I was always thinking that some day I would find my dream car. I wanted to find and own a 56 Ford Glass Top. They were so hard to find in our area. 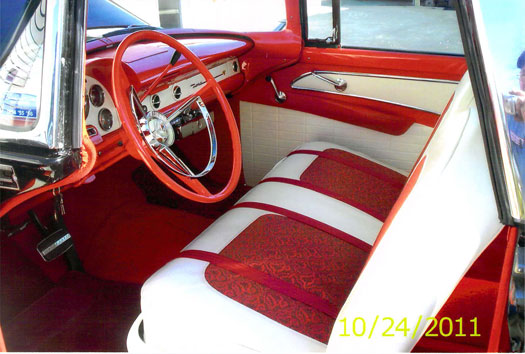 After the children were married and left home, I really got very interested and started looking a lot harder on the Internet for my dream car. We joined the CVA before we had a car. Low and behold I found a car in the Fomoco Times for sale. I couldn't wait for my wife to get home from work. While I was waiting for her, I decided to call him. His name was Hank Gunther from Columbus, Mississippi and I was very lucky that I called him right away because he said I was the first caller and I could see it first. When my wife came home I told her about it but she didn't feel good and ended up having the flu. I told her it didn't make any difference. She could put on some Depends and we were going. I was not going to let this one get away.

I called him and told him we were coming and he said that he had a lot of guys interested so he wasn't going to hold it long. So we left, sick wife & all. She was not too happy with me but she knew this car was my dream. It took us 2 days to get there. It was a very long trip for my wife but she was quite the trooper. 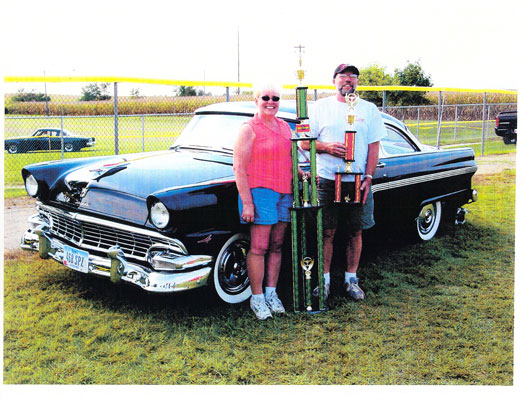 When we got there Hank and his wife were so nice to us. Thank goodness that by then my wife was feeling much better. They made us feel right at home. The car was just as nice as the pictures he e-mailed us and it was exactly as he had described it to me so we ended up buying it. It was a dream that had taken many years but it had finally come true! All the way home I was on cloud nine. My wife told me then that she was very happy to have been part of this journey with me. We did have to do a few things to the car and since then we have showed the car at a lot of car shows. This car has won a lot of trophies and we have met a lot of wonderful people and love the CVA club. We have gone to 5 CVA conventions and have enjoyed every one of them. They are all the nicest people you would ever want to meet. We always can't wait to go to the next one. We have had a lot of chances to sell this car but I don't think that we will ever sell it; at least in our lifetime any way. It is truly a dream come true. This car, besides my wife, children, and grandchildren, is truly my prize possession. 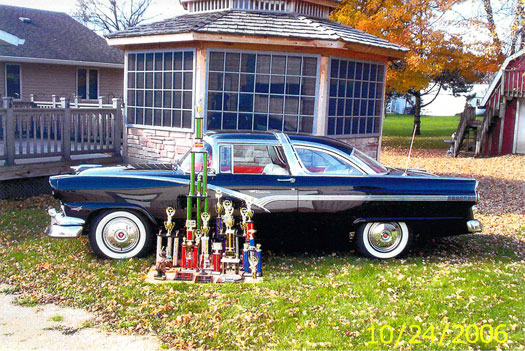 We are sending a lot of pictures along with this article. Hank gave us the book of pictures from start to finish.

We thank you very much for listening to our journey of our dream.