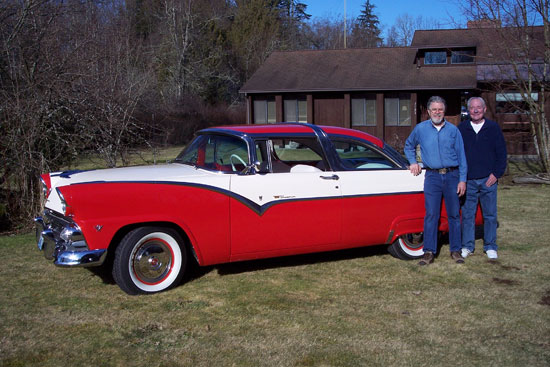 I was a junior in high school, 16 years old, when my Dad got me a job with the Ford dealer. The dealer was moving from downtown to “Auto Row”. My job was grunt work, moving the parts department and assembling shelving. The job lasted until I turned 17. They wanted to keep me on, but I needed to be 18.

Since I couldn’t work, I saved parts books from the late 40’s to the 60’s. Since there was no recycling back then, they would have went to the garbage. Little did I know these would be a resource later in life. I did get to know the parts guys at the Ford Dealer pretty well. At the time I was driving a 55 Sunliner. It was cool to get a “discount” on Parts, so I was in and out of the dealer often.

One day at the counter, one of the parts guys overheard that I had a 55. He asked me if I was interested in a 55 Crown Victoria. It was in a garage with a transmission problem, a crunched quarter panel, and couldn’t be driven. I bought the Crown for $50 and towed it home, about 15 miles, with a chain. It’s 1966, I’m a 17 year old senior in high school and have a running car. With school, Drive-ins, cruising Colby (local strip) and parties every weekend; there is no time or need to get this new car running. So it sat, always garaged.

Now to fast forward, I graduated from High School. I got married, bought a couple of houses, started a business and had 2 sons. And there it sat, always garaged.

In the 80’s a gentleman came into my auto repair shop and announced he was the original owner of the Crown and wanted to buy it back. I said “no” and kind of cut him off. He returned several times and turned out to be an all right guy. He had told me he had the original Bill of Sale for the car. His job was driving for Hertz and went by my business often for a few years, then, I didn’t see him.

Upon retirement in 04 it took until the winter of 07-08 to get the honey dos out of the way and commit to restoring the Crown. I had already stripped the chrome, fenders, hood, trunk and lined up a body guy to start the process back in the 90’s. He completed the take off sheet metal and when it was time for the body I had listened to over 2 years of excuses. One day I drove my van over there and loaded up my parts. The take off sheet metal was in primer.

A local body shop owner, who I had dealt with, recommended Doug Sprague, Eagle Rock Restoration. Doug and I met to look the car over and he said he could pick it up as soon as I could strip it. He picked it up directly from the sandblaster. He started the quarter panel repair with the body still on the frame. It just so happened my local Napa Store had closed a store and had a blasting cabinet for sale. How convenient for me? I went to work on the inner fender wells, front rock shield, bumper brackets, and all those bolts. The engine was already at the machinist on hold and I called him with the go ahead. A couple of months later I got the frame back, stripped the front end, rear end, and fluid lines. 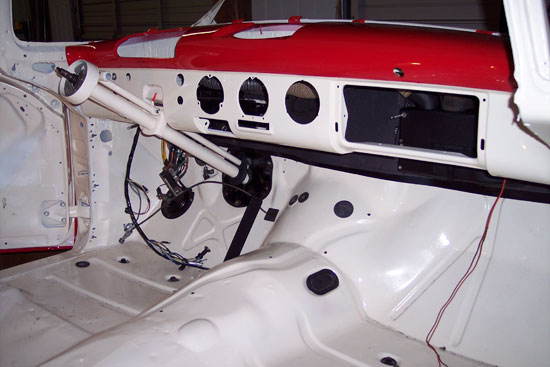 I was at a point of nothing left to take apart. I started scrapping off grease and undercoat, then sand blasting everything. The undercoat seemed to come off best by warming it with a plumber’s torch. Finally after several days of sand blasting, everything from my end was painted.

Going the other way with some assembly was a turning point. I purchased new front end and rear end parts. I made some new fuel and brake lines using the old ones for templates. At the same time that I finished these tasks the engine block was ready. I pre-painted the engine components and I was told the paint would adhere better to the cast iron parts if they were heated up. I made a tent for the block and used a heater to warm it up. I can’t comment as to how I heated the manifolds and heads because my wife will probably read this. I used all of the parts houses that were advertised in the FoMoCo times. Schumann’s provided me with the necessary engine upgrades and there were numerous calls to the technical advisers. Finally the running gear and exhaust were in and ready for the body. 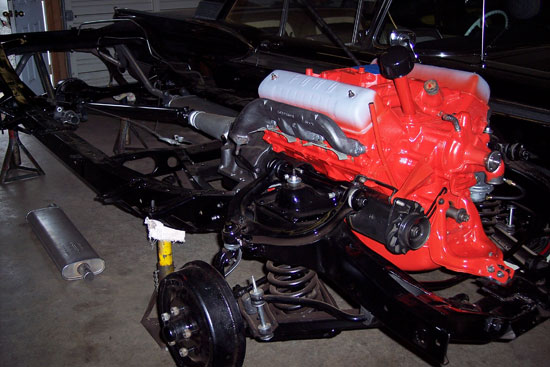 Another couple of months and the Crown was brought home. I had polished all of the stainless parts while I was waiting for the bodywork and it was the first to go on. Next to go on were the headlights, taillights, rock shield, grille and bumpers. It was going together smoothly because I tagged every thing at tear down. After I was finished with that I moved to the inside next adding the dash, grommets, door and quarter glass, and then wiring. I bought an interior kit from LeBaron Bonney and this is where I deviated from original equipment. I ordered red carpet, wind lace, and kick panels. I also installed red carpet at the bottom of the door panels. I could see the end with just the engine compartment left to complete. 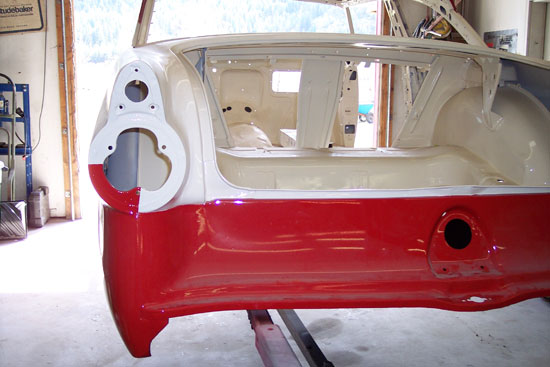 It was about this time I had went in the house for lunch and my wife asked me to bring her the Rolodex for an address. I reached over a stool and dropped the Rolodex. A card fell out and landed on the floor. I picked up the card to read the name to return it and the name was Jack Boere the card was marked “original owner of Crown”. I didn’t realize I had his card, and after 20 years I really couldn’t recall his name. I decided to Google him. I know he was a lot older than me and would not have been surprised if he was deceased, but not the case! Google listed him at the same address. I put together some pictures with a letter and mailed to the address on the card. He called immediately with much excitement. He retold his story of being discharged from the Navy, picking up the car from Dearborn, and driving it home to Enumclaw, Washington. And yes he still had the Bill of Sale!

Upon completion of the car I contacted Jack and told him we would be at car show in the area. After forty-seven years Jack was reunited with his “baby”. Jack was invited to our home and I took him for a drive in the Crown. We pulled into a park and I told him “it’s your turn”. Jack drove us home. Needless to say he was trilled with the day. He is the definition of being obsessed with a car. Before his emotional departure he gave me the Bill of Sale, an owners manual, and photos.