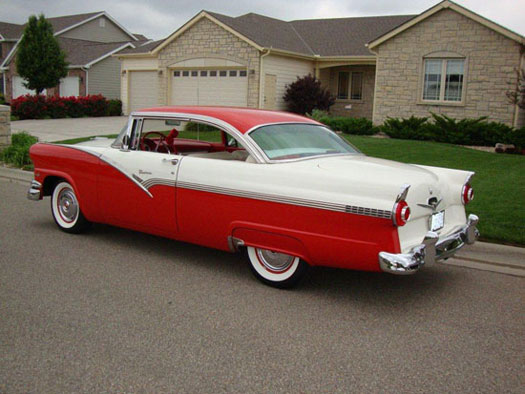 When I began to think about retirement in the fall of 2007, I decided that I needed a project to keep busy until I firmed up a plan for the future. Fords were the cars of choice in my family while growing up in northern Illinois. Further, my wife, Ronna, and I owned several Fords during the 1960s through 1984. The 1955 and 1956 Ford hardtops were two of my favorite cars of the 1950s. During my search of the Internet during the spring of 2008 I found a red and white 1956 Ford two-door hardtop in a dealership located on the Oregon coast.

The owner’s representative sent me pictures of the underside and other areas that might contain rust. It appeared to be a rust-free solid car, and, it was a chance for Ronna and I to once again visit the Oregon coast since leaving the Northwest in 2000. The decision on the car was helped by the fact that the colors were my first choice in a classic Ford. We have frequently named our cars and Ms. Scarlet seemed appropriate due to the shade of exterior red. It appears to most Ford enthusiasts to be Torch Red used in both 1955 and 1957; however, there is more orange in the final color due to either the source of the paint or changes in pigments due to the Arizona sun.

The car was manufactured at the Long Beach, CA plant on May 31, 1956 and its years in Arizona and restored in the early 1990s. The engine is a 312 Y-block with a water cooled Fordomatic transmission (3.31:1 axel ratio) and power steering. The original exterior colors were Bermuda Blue and Colonial White; however, the colors were changed to red and white during the partial restoration in Arizona. The standard master cylinder was replaced with power boost brakes and a dual master cylinder. The engine was rebuilt at about 77,000 miles; however, the maintenance history of the transmission was unknown. We determined later that the transmission had been rebuilt, probably when the car was restored in Arizona. An after - market air conditioner was installed several years ago as indicated by the water marks on the condenser, which we replaced in 2009. The history of the car for the next few years after the limited restoration is unknown until it was sold in 2004 to someone in Portland, OR who decided after a short time that he did not have time for a classic car. It was sold again in February, 2005 to an individual on the Oregon coast who enjoyed driving the car in parades and cruises during the summers. He listed it for sale in late 2007 with about 79,000 miles on the odometer. During its time on the Oregon coast, several upgrades were done including a new interior, electric windshield wipers, and an electric fan to improve cooling while running in parades. Also, the generator was replaced with an alternator.

After the car was delivered in June, 2008, a major transmission seal was replaced and the bands adjusted. The odometer, fuel gauge, clock, heater blower and cigarette lighter, were either repaired or the wiring connected as needed. A 1956 radio was installed with an AM/FM conversion to maintain the stock appearance of the dash. During the winter, the front and rear bumpers were rechromed and wide white P215 x 15 radial tires were mounted on the car, which completed the classic appearance of a 1950s car. The weather stripping around the rear windows and the “flippers” above the front windows were replaced. Pot metal ornaments (e.g. hood and trunk ornaments, side mirrors, and exhaust deflectors) were replaced and all stainless steel trim pieces were polished. 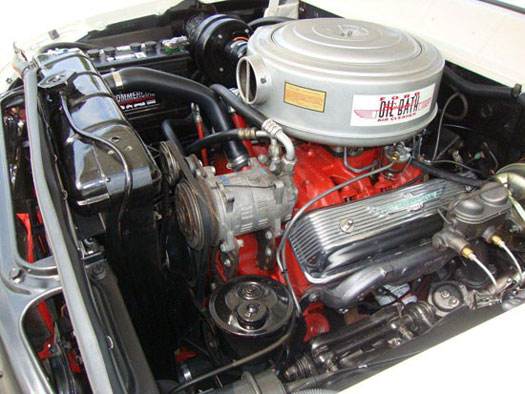 During 2009, the rear leaf springs were replaced and the ride and stability improved by installation of Kyb gas shocks. A new automatic choke tube was installed and the automatic choke was cleaned and rebuilt. A new wiring harness to the trunk replaced the original “crispy” wiring that showed its age and the effects of the desert heat. The points and standard coil were replaced with a Pertronic electronic ignition and Flame – Thrower 40,000 volt coil.

Upgrades continued during 2010 after finding a differential that was suitable for rebuilding. The rear axle bearings and seals were replaced before the differential was replaced. The differential no longer “sings”, and it is not necessary to turn up the volume of the radio to cover the noise of the differential. Installation of a 3 row high efficiency radiator significantly improved cooling and lowered the run temperature of the Y block engine. The Holley 4000 carburetor was rebuilt due to leakage around the float valve and other sites. A 3rd brake light was installed to improve safety. The original fuel pump that had been disconnected was replaced with a single action pump, and the electric fuel pump attached above the rear axle was left in the fuel system to improve starting and guard against vapor locks during hot days in Kansas. The speedometer was rebuilt in late 2011. Finally, a Rostra universal cruise control was added this spring in to make driving more comfortable during trips to regional CVA meetings in Iowa and Missouri. 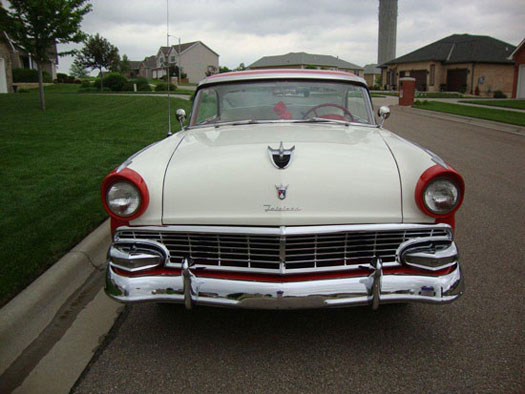 These upgrades are very similar to those described by Jerry Thomas (FoMoCo Times, Vol. 34 (32), page 19, 2011) in which he addressed issues of 1) comfort and ride, 2) electronics, 3) reliability, 4) performance, and 5) safety in his 1956 Ford Victoria. The handling and ride qualities of our car were markedly improved by the new leaf springs and gas shocks. Performance was enhanced by the single action fuel pump and rebuilding the carburetor. Safety issues were addressed by the dual master brake cylinder, installation of the 3rd brake light, and installation of seat belts. The car is a pleasure to drive and we are regular attendees at local Friday night cruises. We have met other Ford owners at Upper and Lower Midwest CVA Regional meets and thoroughly enjoyed those meetings during the past 3 years. 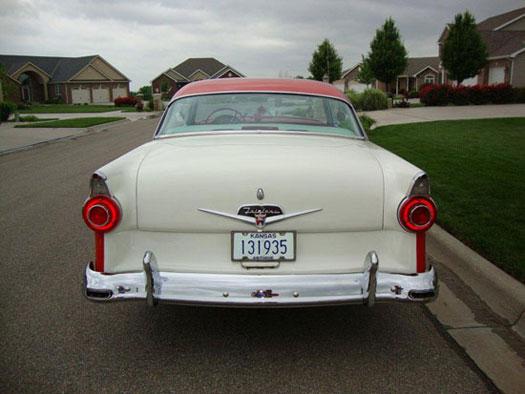 Parts to complete the restoration of Ms. Scarlet were supplied by Concours Parts and Accessories, Dennis Carpenter Reproductions Products, and Tee-Bird Products, Inc. A special thanks to Mr. Norbert Doll, who supplied parts not available from suppliers. A special thanks should go to the Car Clinic in Manhattan, KS for their help with most of the mechanical work described in this article.