In May 2005 I purchased a 1955 Crown Victoria, which was already here in Australia but needed a complete rebuild. With the help of my good mate Frank and my son Jayden we were off to pick her up. When I got her home my wife said, “you paid how much for that” as she was looking through the front window. Anne did not even come out the door to look at it. I’m sure there is a lot of you guys who can relate to that comment as I read in an article in the November 2011 issue called “The Road To The Party” that was by Ray Idleman Jr, If anyone hasn’t read his story make sure you go back to this issue and have a read. What a character Ray must be. 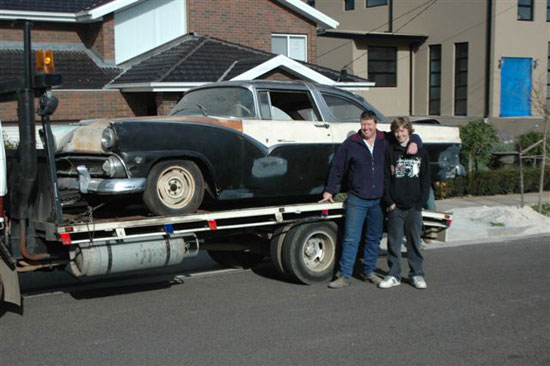 A few months went by. I was looking at my purchase and sometimes wondering what I had done. My mates were calling and saying “what a heap”, but I also had a lot of encouragement from other mates who could see beyond the faded paint, the rust, broken windows, and dilapidated interior.

In September 2005 I started the dismantling the car with a 2-year time span in mind. I called in a good friend of mine Robert who was in the middle of a rebuild on a 1956 Victoria. There was a fella there by the name of Dennis who was doing the body work on Roberts car. After a chat with Dennis I asked if he would be interested in having a go at mine, and he said yes.

It all began in my back yard shed at home, a complete body off restoration. The first step was to get the body bead blasted. Wow that really showed up what I had to do in the rust department. One section of floor was replaced. All of the outriggers were removed and repaired. The inner and outer rockers, bottom of inner and outer quarters, tail pan, and door shells where repaired. I had a sheet metal guy make me some new door skins instead of patch repairing them. Roof sections under the mouldings, bottom of front fenders, and trunk lid skin were removed repaired and replaced. The front fenders inner sections were removed just to seal and paint underneath this section. I was amazed how many areas didn’t have paint on them. This would have prevented a lot of corrosion over the years on these cars, so with that I painted everything I could get to. I then dismantled and painted where I couldn’t. The chassis was sand blasted, new front cross member installed and all suspension and related parts replaced. All the rust repairs and bodywork were now done. 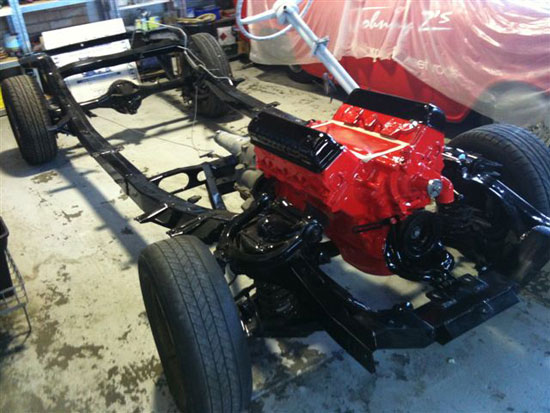 So after 4 years working in the shed on weekends and some weekdays, the body was near complete. With the body almost complete it was time to take it off to another guy, Johnny Z. Johnny did all the finishing touches to the body, fixed a few mistakes I had made. The car was now ready for paint, new trim, rebuilt motor, transmission and diff where installed. A new trim kit and new wiring was installed as well as new glass, which I also had to ship from America. The glass here is only from sedans. After 12 months it rolled out of Johnny’s shop completed. Wow what job he did on this. It looked amazing. I have kept everything I could to original specs apart from a 12-volt conversion and electronic ignition. I have made some minor improvements to the hood where it was strengthened and the trunk hinges where modified so the paint doesn’t scrape off the in the opening and closing process.

My 2-year plan was blown out the window. It is amazing how the time flies when you are building something like this. Five years went so quick. It has been completed for over 12 months now and still looks as good as the day it was finished. I drive her as often as I can, even coming home from work some days and taking her for a cruise.

The biggest problem we have down under is the lack of parts for these cars. We did not have two door cars in the Customline / Fairlane range. We only had the Customline range here and there were only in the four door sedans, wagons and utes. This body style ran from 1955 to 1959. This is something that I reckon all of you CVA members would have loved to have. Our 1958 and 1959 Star model is a generic of the Canadian Meteor. This is quite a rare car in world rankings as only 5999 where produced. This included the sedans, utes and wagons. Hopefully these rare Australian models will one day be recognised by the CVA and included in the list. 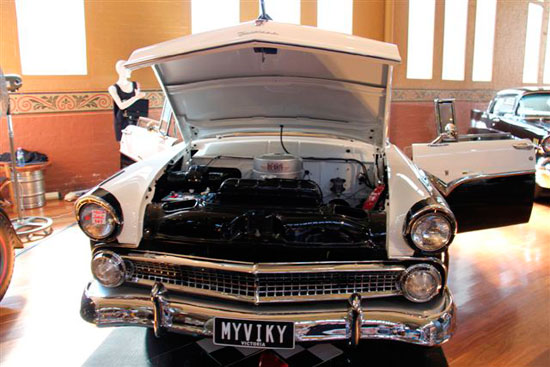 We do rely on some technical advice from you guys from time to time, although we do have a few mates here who are a bit clued up on some of the things. They make sure the parts go back together ok and the right way. A lot of parts have to be sourced from the USA, as our Aussie stuff was different. When I started the Crown I think we where only getting about .78 cents for the dollar and then paying freight over to here as well it can all get quite expensive.

Joining the CVA has been great with the fact we get the Fomoco Times each month, I look forward to all the stories as I read it from back to front and then some more. It has also opened up a lot of information as well as where to get parts from. Toby and Sandy Gorny have been a great help in sourcing parts, especially if they didn’t have what I needed. When I call them its just great to chat to them. One day I will get over to a CVA convention and hope to meet a lot of my fellow CVA members.

My new project is a 1955 Sunliner, a Bumble Bee, which I bought off EBay from Virginia. Of course when that came home someone asked my wife Anne, where does she want it? Her reply was that you could take it to the rubbish dump. So, anyway, this will be my next 2-year project.

Hope you all enjoy the story and the pics. Happy Cruising!
James Randall