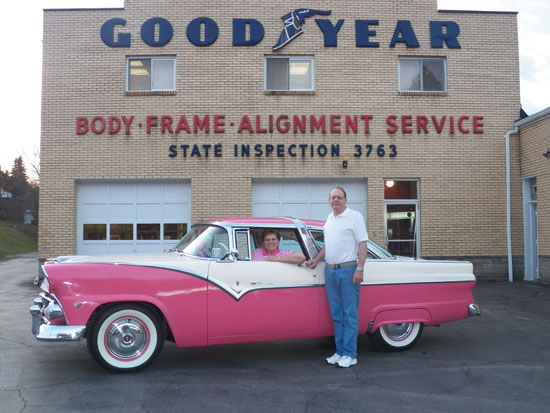 It had long been a dream of mine to own a Crown Victoria. On the other hand, my wife Karen, long had a dream of owning a ’57 Chevy Bel Air. Ahhh…a Ford and Chevy lover in the same family – what to do? It took a bit of convincing, but Karen eventually ended up seeing things the Ford way but she had one request – she wanted a seafoam green and white Crown Vic. The search was on in the spring of 2008. When I came across a beautiful tropical rose and snowshoe white Crown Vic on the Indianapolis, IN Craigslist I knew I’d have to convince her that this was the car for us. Luckily, she agreed. I had some long phone conversations with the owner as to its condition as I had previously towed a trailer to North Carolina to buy one of those “great condition,” “no disappointments” Crowns that was a junker in every respect. After I was sure this car was worth a look, we borrowed a trailer and headed for Indiana. I was aware that the body and interior had been restored while leaving the underneath totally un-restored. After a thorough inspection, I could see that the car needed inner quarter & rocker panels as well as repairs to some of the floor supports. Considering the great condition of the paint, chrome and interior, I decided it warranted repairing the undercarriage and we loaded our “new” ’55 Crown Vic on the trailer for its ride to its new home in Pittsburgh, PA.

Upon arrival at our home in Pittsburgh, our tropical rose and snowshoe white ’55 Crown Vic drew immediate attention from the neighbors. Once the car was backed off of the trailer, I told a few neighbors to jump in for a ride around the block. The trip was over quickly when the brake pedal went to the floor at the first turn. The car had sat for a long time, which caused the wheel cylinders to start leaking immediately upon use. Although disappointed that there were problems so soon, I knew from previous experience that there would always be some issues with a 55-year-old car. The good news was that I could do the repairs myself and the brake parts were inexpensive and readily available.

With new brakes and the cruising season arriving soon, we cleaned and polished the car to get it ready for its maiden Pittsburgh car cruise. Our first venture out was only a mile from our home to a weekly Tuesday night cruise at the local American Legion. The ’55 Crown was a standout amongst the usual Bel Airs, Mustangs and Camaros. While the Crown Victoria is not rare by any means, we rarely see more than one at any one car cruise. We attended a lot of car cruises and had a lot of fun that first summer of 2008.

During the winter of 2008-2009, I worked on a number of projects on the car. The non-working 6-volt tube radio was removed and the tubes swapped from a couple of spare radios that came with the car until the right combination worked. Who knows how long it had been since that radio last played? Also, the electrical system underneath the dash was a mess with dangling wires and broken connectors everywhere. Numerous dash lights, engine indicator lights, backup lights and the temperature gauge were not working. With the help of a wiring diagram and a lot of patience, every light now works, including the hidden courtesy lights in the doorframe. The temperature gauge would not work because there was no 6v sending unit in the engine to connect to; someone had installed an aftermarket sender to an out-of-character silver under-dash gauge. That was replaced once I located a NOS FoMoCo sending unit on eBay. After the wiring project was completed, a lot of time was spent detailing both the interior and exterior. The rose and white upholstery was carefully cleaned and the paint was touched-up and polished. Since our winters are generally 5 months long, the car was looking pretty good after all of that attention. When cruising season rolled-around in the summer of 2009, the Crown Vic was ready to go…well, almost. The car always started easily enough, but it started to sputter and stall occasionally. A new fuel filter helped at first, but the problem kept coming back. On one occasion, Karen volunteered to drive a young couple to the prom on an exceptionally hot summer evening in a big traffic jam, and of course, it quit; but only after it backfired first and scared everyone in the car! A plan was in place in the event something happened with the car, so the kids were picked-up and delivered to the prom in plenty of time. By the time I arrived on the scene, the car had cooled down and started after some coaxing. We drove it home with no problems. I decided to replace the fuel pump along with the fuel line and filter. In the meantime, we had heard about the CVA National Convention being held in Somerset, PA that year and decided to drive the car 70 miles or so to it for the day. We were traveling west on the PA Turnpike when Karen, who was driving, announced that the car seemed to be losing power. Sure enough, it slowed to 10 mph and she pulled off onto the side of the road. We let it cool down awhile and then I drove on from there. We got about two more miles down the pike when it started to slow down again. With cars and semi-trailer trucks whizzing by us at 70 mph, a frantic Karen yelled: “Put the flashers on or we are going to get hit”…to which I calmly replied, “They weren’t invented yet!” We still get a chuckle out of that every time we tell this story. Fortunately for us, a couple from New Jersey, also heading to the CVA convention and driving down the turnpike, stopped in their late model Ford Crown Victoria and were kind enough to follow us, with their flashers on, the rest of the way to Somerset. At the convention several folks helped remove and replace the fuel filter and we made it home okay. Unfortunately, we never got the names of any of the kind people who helped us out, so whoever and wherever you are, if you are reading this, a belated thank you! The continually clogging fuel filter pretty much meant that the gas tank was deteriorating inside and installing a new gas tank would become the #1 project on my 2009-2010 winter project list. 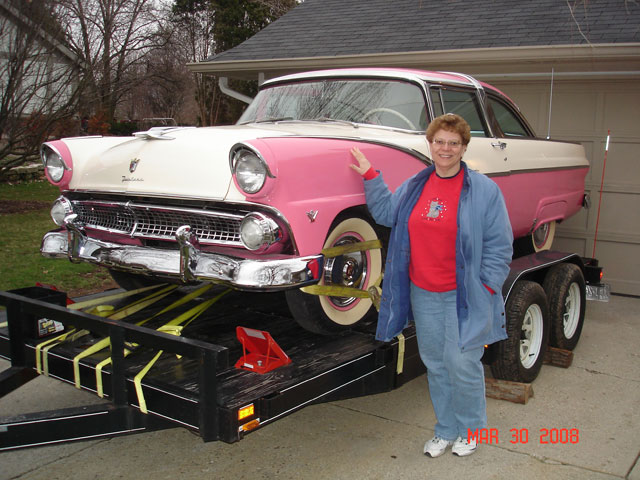 However, before summer ended, we had the misfortune of being rear-ended in our Crown Vic returning from a car cruise. The hit was so hard it knocked the cigarette lighter out of the dash receptacle and the battery backwards into the fan. Surprisingly, the rear bumper held up extremely well and saved the body from major damage…the Buick that hit us didn’t fare so well. A re-chromed bumper was easily located as well as the bumperettes, fuel door, license plate frame and exhaust tips and a local body shop put it all together and repainted the tail panel. It could have been a lot worse. Since seat belts were not chosen as an option for the car in ’55, I immediately installed a new set of front seat belts.

In addition to replacing the gas tank, another project that was started in the winter of 2009-2010 but not completed until the winter of 2010-2011 was repairing the undercarriage. I asked for inner rocker and quarter panels from Santa and set about the task of ripping out the rusted metal and prepping for the installation of the new metal. A combination of welding and panel bonding adhesive was used to attach the new panels. The 3M panel bonding adhesive offered flexibility in attaching areas of the non-stress bearing panels where welding was not possible. All-in-all, after hundreds of hours over the span of two winters, the underbody was restored to like-new condition and coated with POR-15 epoxy paint. Since this car was purchased to drive, I felt this type of coating would provide the best protection from everyday road conditions. New radial tires were also purchased to replace the well-worn bias ply tires that came with the car. The radials greatly improved the handling of the car, but the steering was still a bit “sloppy.”

After having driven the car some 4K white-knuckle miles on Pennsylvania roads for the past several years, it became imperative to rebuild the front end. This and a dual master cylinder upgrade became winter 2011-2012 projects, which are just about finished. The entire front end was disassembled, cleaned, inspected and anything that was worn was replaced. eBay was a constant source of parts as they were readily available and reasonably priced. There were only a few bad parts; an idler arm and all of the upper A-arm bushings. I expect it will drive like a new car this summer! It will also be a little safer in the brake department with a modern dual-bowl master cylinder and all new brake lines.

Having now completed all of these major repairs to the car, we are looking forward to another great summer cruising season. The car always gets plenty of attention; especially from the little kids! The joy on their faces when we allow them to sit in the driver’s seat is priceless. We would like to give credit to the garage owner, Frank Funfar, which allowed us to use his open for business old time gas station for photos and the photographer Jake Agate for taking the photos. We plan to make the trip to the CVA National Convention this year in Ohio. We are looking forward to meeting some of the people we have read about in the Fomoco Times over the years and maybe even getting to thank in person the people who helped us in Somerset. You have a great magazine and we look forward to every issue. We hope to see you all this summer at the CVA National Convention!