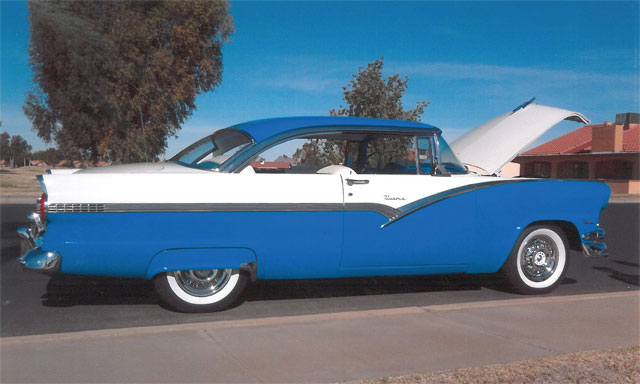 Like many CVA members, I was the proud owner of a new Fairlane in 1956. I was a college student, working during the summer as a parts driver for Crenshaw Motors Ford in Los Angeles. It was a good job because I got to drive a new Ford pick-up, and when I wasn’t making deliveries, I worked in the shop, sweeping and cleaning. I literally fell in love with the 1956 Fords and was particularly impressed by the Fairlane with the 312 engine.

The summer job ended and I returned to school. With a loan from my dad and the trade in of my 1951 Ford 2-door sedan, I purchased a black and red 2-door Fairlane V8. I enjoyed driving this trouble free car for five years. While it only had 35,000 miles, my folks were so pleased that I was a college graduate that they bought me a 1961 Thunderbird. Unfortunately, I let the 1956 2-door go and have regretted it ever since.

Over the year I’ve owned a variety of vehicles: some good, some not so much. They included Honda coupes, a Pontiac Bonneville, a 1968 Cougar, a Mercury Capri, several Toyotas and four Dodge Ram trucks. I even restored my dad’s 1968 Cougar to its original condition. Through it all, I never found a car that caught my fancy like the 1956 Ford.

My quest to relive my younger days began ten years ago. With the support of my wife, I began looking in earnest for a 1956 Victoria. Not an easy task! Few owners of mid-century Fords wanted to part with them; this is particularly true in the southwestern US. The search dragged on. I became an avid reader of Hemmings Motor News. I began prowling car shows in the Phoenix metro area, even went to the big Ford show at Knotts Berry Farm a few times. No luck!

The fall of 2005, while at an all Ford car show, I spotted THE CAR I had dreamed of, parked between a 1955 and a 1957 Victoria. I chatted with the owners of these cars, but could not locate the owner of the 1956. I was told he was a tall, white haired guy. After walking around the show several times, I returned, only to see the car leaving the parking lot and speeding away! 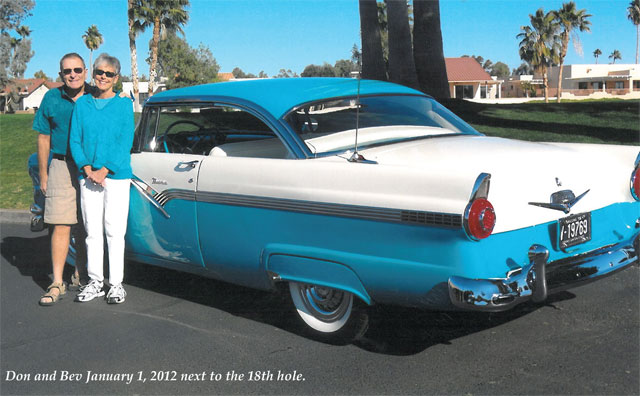 Several weeks later, my wife and I were visiting the weekly Saturday car show at Pavilions in Scottsdale. There was THE CAR! Again, it was surrounded by a number of vehicles whose owners were sitting around, but the owner of THE CAR was nowhere to be found. I was told to look for a tall, white haired, good looking guy. Eventually the gentleman returned to the car and we struck up a conversation.I told Jerry Gobeli of my quest and asked him if he knew of another 1956 Victoria as nice as his. He told me the story of THE CAR and said he would contact me if he learned of a similar vehicle for sale.

Three weeks later Jerry phoned to see if I was interested in his car as he had decided to follow his heart and buy a 1962 Pontiac Grand Prix he had located in Florida. After doing my due diligence, I bought the car a week later. I had gone about 6,500 miles since a “frame-off” restoration in Idaho, completed in 1995. Jerry has become a good friend even though from time to time he says he should never have sold this Peacock Blue and Cream dream. He has recently purchased a newly restored black and white 1956 Victoria, so we often sit side by side at the Scottsdale weekly car show.

In the six years that I have owned the 1956 Ford Victoria, I have driven it less than 3,000 miles, enjoying every mile. The restoration shop did an excellent job on the car, which cam with a 292 V8, Fordomatic, power steering, power brakes, Town and Country radio, back-up lights and skirts. In addition, they installed a Petronics electronic ignition, a four core radiator and classic air conditioning.

I had the seats rebuilt and re-covered with factory up-graded full vinyl two tone upholstery. The upholstery shop I selected specializes in recovering antique furniture, but occasionally will work on a car if the job is challenging. He kept the seats for four weeks, while we were on a trip. When we returned, he reported that our beautiful seats, which had been in his front window, attracted a great deal of new business.

I still try to turn a few wrenches and deeply appreciate the help provided by Don Stickler, Norbert Dahl and Toby Gorny. These gentlemen are never too busy to answer my questions and offer their expertise.

There are only a few Ford Victoria’s in the greater Phoenix area. Whenever we take our car to a show, it draws a crowd of people who are both surprised and happy to see there are still stock 1956 Fords around. Like most other club members, we would not part with our car for love nor money, and believe me, we have had a number of excellent and interesting offers!