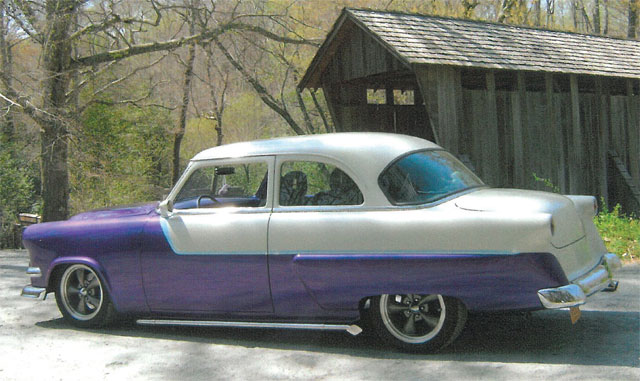 My wife and I enjoy our Fords and wanted to replacement for a 1948 F1 so we could take our grandkids with us when we went to shows. Featured in the enclosed pictures you will find my 1954 Ford Mainline 2-door sedan, this fits the bill. The car was a solid North Caroline car with very little rust. The previous owner had replaced the floor pans and the front clip with a Fat Man clip and then basically stashed it in a trailer for about 10 years. He called it “my car in a box”, as it and many parts that came with it, were all in boxes.

It was finished in March 2011 and in the past year my wife Mary and I have put a little over 3,000 miles on it. She says it’s a far cry from the one she drove as a kid. Since it completion it has won nine awards, of which two were “best paint” and four were “Best of Show”, a couple of ladies choice are in there as well, it seems they love the purple paint!