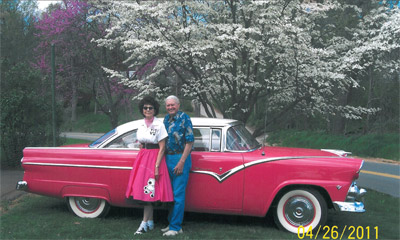 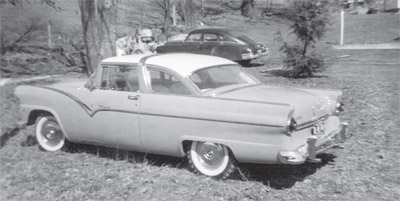 LaRue and I were engaged to be married in December, 1956. In November, we decided we would need to purchase a better car to jumpstart our married life. So, we asked our local Ford dealer, Crouse Ford in Taneytown, MD, to let us know when a good, previously-owned car became available.

They notified us that a 1955 Crown Victoria, in excellent condition, had come in. On our way to view the car, I mentioned to LaRue that it was “pink”. Her response was: “Oh my gosh, PINK!!” It was actually Tropical Rose and Snowshoe White. When we saw it, and took it for a test drive, we fell in love with it.

We were married December 14, 1956. Nine months later, I was drafted into the Army, after basic training, I was ordered to duty in Germany. LaRue planned to join me there. This meant that I would have to sell my Model T, Model A, 1941 Nash, and LaRue’s 1951 Nash Rambler. Luckily, my parents agreed to store our 1955 Crown Victoria in their garage until we returned.

We purchased a previously-owned Mercedes while in Germany. After visiting nine European countries, we sold it before returning to the States.

Thirty months later we took our Crown Vic out of storage. Our daughters were born in 1962 and 1964 and we continued to drive our “pink” car until 1972. We kept the car, but it deteriorated considerably because it sat outside.

In 1994 the Crown Vic was restored to its former glory. So, this December 14th on our 55th Wedding Anniversary, we will take our 1955 Crown Vic “wedding car” for a celebratory spin. We’re so glad that we and our car can celebrate this wonderful day together.