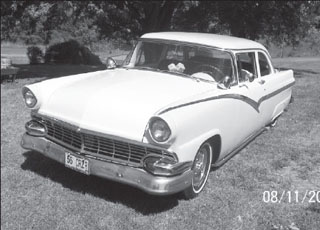 In 1956 when I was 14 years old, a couple of very notable things happened to me. My parents sold our farm and bought another one about ten miles away. This move made it necessary for me to change schools. The first notable thing happened on the first day at my new school. I met the most beautiful girl I had ever seen and fell for her instantly. The second notable occurrence was discovering that a neighbor down the road had the most beautiful car I’d ever seen (ever have seen since). It was a pink and white 56 Crown and had a fantastic sounding set of pipes. I lusted after that girl and that car for 40 or so years, but never managed to connect with either until circumstances brought us together in 2001. Paula and I have been together since then and later that year we pulled a rusty pile of junk out of a pasture where it had been sitting for 30 plus years. It had no drivetrain in it and was a complete rust bucket. It took us about 5 years to get it back into shape. There are many hundreds of hours of work, a 4X8 sheet of 18 gauge metal, a gallon of Bondo, 3 parts cars and several dollars in what we now proudly drive around in. It’s not pink and white and it’s not a Crown, but we love it anyway. The drivetrain is what I think all mid-fifties Ford should have. A slightly warmed up good old Y-block with a set of Smittys. We completely redid all the mechanics on the car, did all the work with the exception of the interior. We made a few modern concessions, including a Vintage air setup, dual master cylinder and power brakes. With radial tires, modern gas shocks and upgraded sway bars and springs it drives and handles about as good as a much newer car. This is a car that’s done the way we central Illinois farm boys would have done it if we had the money, which of course we didn’t. Shaved hood, trunk and door handles, lakes pipes, skirts and Olds Fiesta wheel covers make this what we all wanted back in the late 50’s.

We don’t go to many car shows, since we built it as driver and that’s what we do with it. We’ve averaged 6-7,000 miles a year for the last 5 years and it’s still a real trip back in time driving it. 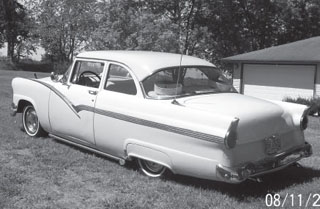 Now I have the girl and the car of my youthful dreams. How lucky can a guy be?