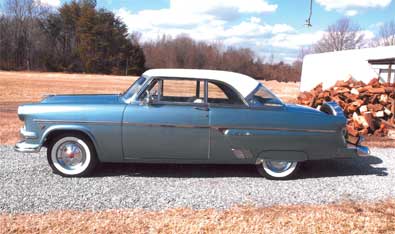 In the early sixties I became interested in old cars. I built a 1933 Ford three-window coupe, but like most young men I wanted something else. I met my wife soon after that time. My main car then was a 1953 Ford four-door. She could hear me coming half a mile away with the rear end humming so loud. After we were married I traded it for a 1962 Ford. Down through the years I sold the three-window coupe. I told my wife that if I could find a 1953 Ford I would buy it and restore it. I looked for one for several years, but to no avail.

In January 1994, I was rabbit hunting in the northern part of North Carolina and walked up on a 1954 Ford two-door hardtop. I was so excited, I could not believe my eyes! I then began the process of finding out who owned it and when I did find out I could not believe what I was hearing. The car was in the middle of a divorce. The lady won the car as part of a divorce settlement. I talked to her to see how much she wanted for it and almost fainted when she said “just get it off my property!”

After I brought it home I started to do a little research on it and learned that two ladies bought the car new. They sold it to a man who owned a service station. He always serviced and took good car of the car and then he sold it to the guy who parked it in the woods and was involved in the divorce. The car has since had an off-frame restoration. The 239 Y-block was tuned up and has been running since 1998. The transmission has had a new seal installed. I did all of the work on the car with help from some friends. When it came to the paint, the paint that was in the trunk was good enough for me to take a picture to get the correct color. The car had forty-three thousand miles on it and has been rebuilt from the ground up. The car is completely original except for the air conditioner, record player, Kleenex holder, spare tire and my friends in the back seat – Hecliff and Roscoe. It is driven daily and I named it “My Rabbit Baby.”

PS. I installed the air conditioner two summers ago. It cools very well, but overheats when the temperature reaches 90 degrees or more. If you have any suggestions about what I should do to fix this problem, please contact me at This email address is being protected from spambots. You need JavaScript enabled to view it..