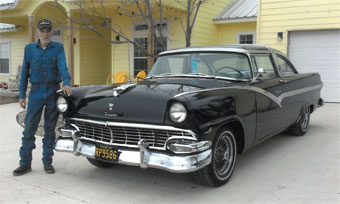 I saw your request in the last newsletter wanting pictures and articles, thought I might send a few and tell you about my ’56. I spotted the car in ’81 sitting at a house in Austin, looking like it hadn’t been driven in some time. Turns out that it had been sitting there for 9 years, his boss had given him the car in ’72. The heads were off the engine and had been for a lot of years. His boss was a doctor that he worked for a long time. He showed me the car, I gave him my card and told him if he changed his mind and wanted to sell, call me. The car had most all of the factory options except a continental kit and glasstop. About 2 or 3 months later he called and said he would sell the car. About the same time that I bought the car from him I bought property in Lytton Springs, so I towed the car out here and stored it in the barn where it stayed safe and dry for another 25 years. 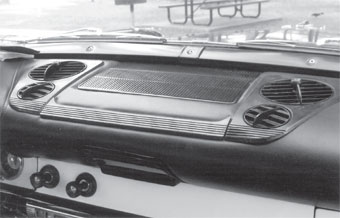 I’ve been a self employed mechanic all my life, but in 2004 I slowed down and started working on the car. After sitting since ’72 I had to take the car completely apart. I went back with a 351 Windsor engine because it will sit on the original engine mounts, I didn’t want to cut anything. I put in a roller cam and lifters, hard push rods, world senior heads, roller rockers and rpm manifold with 780 Holley. I used AOD overdrive transmissions with hard shaft and 6 clutch direct. I installed a ’59 9” rear end so I could change third members in about 2 hours and run 4:11 gears around home for fun and install 3.0 gears when I go on trips. I got 19+ mpg on a trip to Mississippi for “Cruisin’ the Coast” with 3.0 gears. I love the overdrive on the highway. I wanted the car to look original from the outside. I painted the car with black lacquer paint myself. It has Dayton wire wheels with flipper caps and power disc brakes on the front. Fender skirts won’t fit with flippers and I still haven’t installed the rocker moldings. 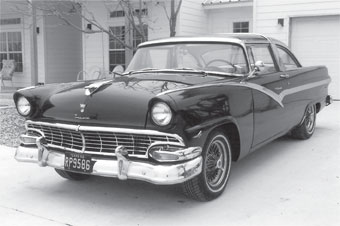 I want to thank Jack and the boys for putting the upholstery back to original and “Straight & Shiney” for taking the dings out of the stainless. Thanks to Larry Grillet for his knowledge of ’56 Fords and helping me on the phone. He’ll probably come down here and whup me for not putting it back original, but I like it like this. I can go to the races or shows. Other than their help I did all of the work myself and am really looking forward to the “Texas Mile” and “Hot August Nites” meets, plus “Cruisin’ the Coast” again in October. I hope to see some of y’all there.