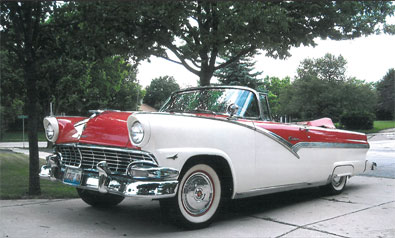 I had been looking for a 1956 Sunliner for a few years when I saw an ad in Hemmings in 1983. A man in Dallas, Texas was selling a Fiesta Red and Colonial White 1956 Sunliner. It turned out that it was Amos Minter, of Thunderbird fame. Well maybe not so much then, but very much so a legend now. the car was going to auction if he didn’t sell it soon. We talked on the phone a few times and decided on a price, based on what he said the condition of car was. My son Frank, who was 12 at the time, and I got on a plane and flew to Dallas. I had money stuck in my socks and hoped we wouldn’t need a plane ticket back. Amos picked us up at the airport with the Sunliner. As soon as I saw it i knew we would be driving home to Downers Drove, Illinois in the car I had wanted since I was 11 years old.

When I was 11 years old my older brother ordered a brand new 1956 Sunliner. Solid Fiesta Red, except for the Colonial White under the side windows like the 1956 Mercs. It had a red and white interior, white top, continental kit, skirts, 312 Thunderbird engine, power steering, power brakes and a Town & County radio. I loved that car and wanted him to keep it until I was old enough to drive. In the summer of 1959 he drove up in a white 1959 Galaxie hard top. I was devastated, I was only 14 and my Sunliner was gone…or so I thought.

Of course, we bought the Sunliner that day in April of 1983. Our drive home was fun and I swear only ‘50s music came out from the Town & Country radio. The 312 engine ran quite well. We didn’t have any problems until we got off of I-55 about 5 miles from home. We then limped the rest of the way, with the car dying and then restarting. The Sunliner was in need of some mechanical work.

Since I purchased the car I have added a continental kit, skirts, Coker radial tires, ABC interior, carpeting, convertible top, repainted top frame, dash and interior trim, truck, firewall and hood. I have also rechromed the front and rear bumpers, bumper guards, parking lamps, grill and stainless straightened and buffed (by The Finishing Touch.) It also has new stainless steel exhaust, exhaust tips, power steering and to say the least, an unimaginable amount of small parts and hours of fun and perspiration. It’s not a show car, but it runs like a top, looks great and is fun for us to drive.