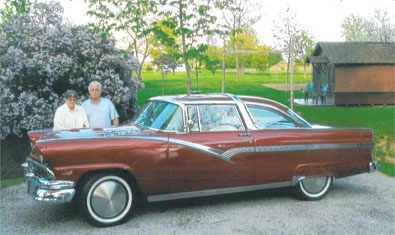 I purchased my 1956 Ford Crown Victoria in 1959 from Ron Shuttleworth, a salesman at Essex Farmers Ltd, Car Division. I was employed there in the Tractor Division, working toward my mechanics license. The car was red and white and I was the second owner. 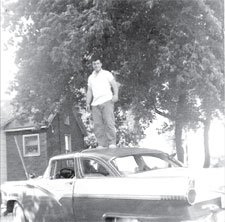 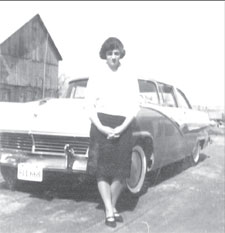 I have enclosed some photos of the early years standing on the roof of the car seemed like a good idea at the time, but I was young and not so wise and did not realize the value of my pride and joy. The young lady leaning on the car in one of the enclosed photos was my girlfriend who later became my wife. These days, no one, wife included, leans on the car. In late 1962 my brother hit a tractor while driving my car and caused extensive damage to the front end. The damage was repaired and I had the car painted, opting to go with one colour-Honduras Maroon. I have enclosed a photo of the car just after the work was done, complete with bug screen to protect my new paint job. In 1966 my car went into storage for several years. Damp barns and garages with dirt floors were not ideal conditions, but they were my only options at the time.

In 1974 my father built a large garage for me with a concrete floor and heating, I was finally able to bring the car home. It sat, covered in blankets and tarps until 2005, when my daughter and I began stripping the car for a complete frame off restoration. When the car was sandblasted the rust was so extensive that the bottom half of the car had to be replaced. My cousin, Phil Jones, was the madman who suggested cutting the car in half horizontally. We ordered another underbody and proceeded to fit it together. By September of 2007, with most of the body panels purchased, the restoration was in full swing. The body and all parts were primed and painted inside and out. The underside of the car had the same shine as the outside. Every body part was then re-installed, very carefully, so as not to scratch. On July 24, 2008 I brought my car home again, where the fun really began. Installing the interior parts, chrome, stainless steel, motor, dash, wiring, a complete Lebaron Bonney interior and trunk was a daunting and often times slow moving task, but definitely worth the results.

In April of 2009 I drove my Crown again for the first time in 43 years, just shy of my 69th birthday-it was amazing! My license plate reads FYNLEDUN and what a thrill to be finally done. Special thanks to my body/paint man, Phil and helpers Larry, Dan, Al, Jim and Hank. And also to my daughter Jodi and wife Fille.