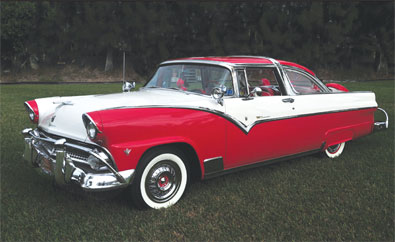 Here is a brief synopsis of my Vicky since I purchased it in 1982 at an auction in Del Ray Beach, Florida. Something just made me bid on the car. I was bidding against two other people. I do not buy on impulse, but I just had to have this car. It was going to be just a driver at the time. With 3 on the tree and a 272, I never planned on doing any more on the car but to drive around in it. I had a black and white Vicky in 1955 and always wished I had never sold it.

Then along comes my neighbor who had a 1967 Vette. He kept begging me to go to local car shows, so I finally acquiesced and went. Low and behold, I won Best Ford! At this point Fairlane Fever takes over and I start the process of improving the car, step by step. Then another friend talks me into join- ing the AACA and I continued to refine her as best I could. Finally in 1988 she won her Senior Award and many preservation awards thereafter. In 1994 comes the divorce and cars are no longer at the top of the list.

In 1999 I moved to Boynton Beach, Florida on a private airstrip with a 3,200 foot hanger. Vicky was banished to the dark recesses of the hanger only to be taken out for a drive around the airport on occasion.

Over the next 10 years I pondered as to what to do with her: should I sell her as is or try to find someone to do the necessary work after years of neglect. I found a local guy to do some paint work on my airplane. It turned out very well, so I asked Joe Earl if he might be interested in working on my Vicky. He said he was slow at the time and agreed to do the work. And so the resurrection of Vicky began in earnest. Fairlane Fever was once again in full mode. Two months later, after new paint, some new chrome work and many thousands of dollars, here Vicky stands, once more, in all her glory. I have already forgotten about the money! I just love to stare at her after all of these years. I am sure you feel the same about your cars. Hope you enjoy the photos.