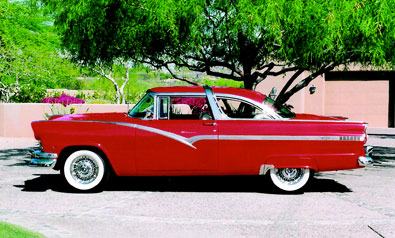 I was born in the late ‘40’s and lucky enough to grow up in one of the greatest, if not THE greatest era of automobiles ever. I was raised on a farm in eastern South Dakota. My father was a car nut so every fall when the dealers released the new models we would spend the day in town viewing all of the new cars. That was nothing new for our era, but I believe that excitement is what made car nuts out of many of us forever.

Growing up on a farm allowed me to learn how to drive tractors, trucks, all types of machinery and cars. By the age of 10 I was operating everything including my grandfather’s 1956 Victoria, whenever I could convince him to let me drive it from one farm to the other to run an errand. His two-tone light green dark green Victoria was the fastest vehicle on the farm and was really fun on the gravel roads with curves! This is how the Victoria became my first favorite car. When I saw a Crown Victoria I thought wow, even better!

Living in Paradise Valley, Arizona now has made attending the many car auctions held here an annual event. At the January 2006 Barrett Jackson sale a Crown Victoria was being offered by Amos Minter. Mr. Minter is famous for his restoration of 1955 thru 1957 T-Birds. In talking to Amos about this car, he confirmed every once in awhile he will restore a Crown Victoria. I had taken a hard look at the Crown before it hit the auction block, but when it’s turn came the red Crown Victoria looked as good as any car I have seen on the well-lit stage. Like many bidders who see a car from their past, I was drawn in and ended up with the highest bid. The car is totally restored and stock except for the paint which is 1957 T-Bird red and the Kelsey-Hayes wire wheels. It has a 292 engine with power steering and automatic transmission.

I had owned several cars over the past ten years: classics, muscle cars and hot rods, but none have obtained the attention this red Crown Vic receives. We are lucky to have several weekly car shows in the Phoenix area. I take the Crown Vic out at least once a month, she has to share! It always gets tons of attention along with several stories of someone they know who had a Crown Victoria.

In November 2009, I entered the Crown in the Good Guys show in Scottsdale. There were round 3,000 cars of all types entered with about 40 awards handed out. The Crown Victoria was one of the 40 selected. It was nice to see it recognized among so many fine cars.