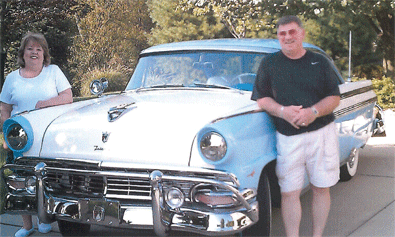 I was 15 years old when the 1956 Ford Hardtop came out. Later on I started working in an AMOCO service station on the north side of Pittsburgh where I filled their tanks and cleaned their windshields. I really liked the open look with the windows down. I was too young and also a lot of dollars shy to buy one, but I knew at some point in my life I would own one. Well that point took a little longer than I expected, 50 years to be exact.

I have owned my Vick for about 10 years and it was a 20, 20 car--20 miles an hour at 20 feet it looked okay, but I was not happy with it and decided to take her down to the first bolt and bring her back up. That was 4 years ago. As we started tearing her down it became evident that this car was originally a sky blue and white two tone that had been re-painted dark blue. With this in mind I decided to bring her back to the original colors and also equip her with every accessory made for the ’56. Little did I know what I was getting myself in to. She now sports 52 Ford accessories from U.S. and Canadian accessories books and 22 after market accessories.

The additional side stainless was a dealer installed option. I have included pictures of the box that the NOS stainless came in. Some people will like it and others will not, but then it is all in the individual tastes. In ’56 Ford introduced their LifeGuard Design Safety System (steering wheel, seat belts, padded dash and sun visors, break away rear view mirror, door locks), this car has them all, down to the original door decals. My steering wheel, shifter and turn signal levers, along with spot light grips, were sent to PearlCraft in Australia to be pearlized.

Believe it or not I also found a complete NOS air conditioning system in their original boxes… which is a great story in itself: I ran across it on e-bay. The person that had it put it up for auction in 4 different lots, so I had to make sure I outbid everyone on all 4. This was NOS in original boxes and it cost me more than I first wanted to spend. The seller was from New Jersey and I told him after the bidding was over that I would do a cash deal and meet him in New Jersey to pick up the air conditioning. We agreed to meet on the New Jersey Turnpike at a travel plaza. We proceeded to transfer box after box into my vehicle and cash exchanged hands. It then dawned on us that that the security cameras were recording this transaction and it sure looked like a drug deal taking place. Thankfully nothing came of it. I asked him where he came across this find. He said his friend, who was with him at the time, works in demolition and was hired to demolish an old mansion. When he showed up on the job his boss said to knock down the old garage out back first. They opened the doors to make sure it was empty. They did not enter the garage, it was dark and dreary inside, but from the doorway could see nothing on the floor and shelves. As they were closing the doors one of the workers said he thought he saw something in the back on the very top shelf. End of story—it was a complete air conditioning unit in original boxes along with the compressor and evaporator and all accessories with the original installation instructions. I still have the boxes, although they are rough from age.

In my younger days I owned a ’51 and ’53 Victoria, but always liked the body style of the ’56 Victoria hardtop. I had the engine bumped up from a 292 to a 312 and added trip carbs, otherwise she is all stock except for some chrome additions and personal touches. This Ford is the last one I will be doing and I have had a lot of help in completing it. It was fun, but I think I will just enjoy driving and showing her from here on out.