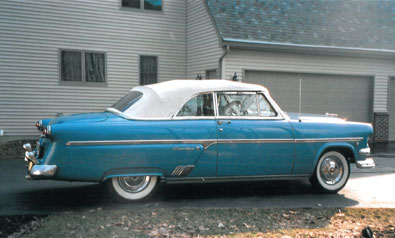 There was a very special activity that happened after we returned from our wonderful convention in Somerset, PA. Janet and I had our 1954 Ford Sunliner invited for the shooting of the movie “Flipped”. I want to back up to the beginning of what happened to get us into the movie.

The staff of the movie officed in a warehouse in Ann Arbor, MI. Sherry Cassar was the Program Coordinator in charge of lining up the cars for the movie. Sherry set meetings with everyone who was selected for interviews with their cars. There were 400 cars to be reviewed for the movie, including the “Twin Pines” milk truck that was at the Greenfield Village Motor Muster this year. Sherry and Dave, a director, held the interviews in the parking lot of the base location warehouse studio site in Ann Arbor. We had two interviews with our 1954 Ford, at that time, one of the 400 cars in consideration. They viewed the cars over a three week time frame. On our second visit we were told that out of the 400 cars there were 20/25 selected for the movie. We were one of the cars! Pictures of the 25 cars were posted on the wall of the office area in the warehouse and assigned a scene in the movie and a date that the car was to be at the selected site. Our dates were August 7th and 8th, 2009 in a local neighborhood where the shooting took place. Also, at second meeting Dave provided us with information regarding possible treatments to our cars to make them look older and used as drivers. I was a little concerned about the fogging spray they use, but luckily they didn’t have to use the treatment on our car when we were on site. Our car was used for two days, on the main street of shooting, where the families lived in the movie. The movie time line is set between 1957 and 1963 in our neighborhood shoot. Note that in the photos you will see a 1950 Plymouth in the driveway across the street from our 1954 Ford. Our 1954 Ford convertible was parked on set with 1957 license plates on it.

“Quiet on the set!” Watching the shooting of a movie was very exciting and interesting experience. “Flipped” is a Rob Reiner, Castel Rock/Warner Brothers movie. As shooting began with the actors and cars taking on their roles, Sherry stayed with the car owners, having the cars moved around as requested and providing information during the 8 hour work days. We had excellent meals provided: breakfast, lunch and dinner for two days, along with a few dollars in our pocket for being invited to have our car in the movie. On our second day, at the end of shooting, the actors and Rob Reiner came up to the house where we were. Low and behold, the timing was perfect and I had the opportunity to talk to Rob Reiner and shake hands with him. We talked for about 5 minutes or so. He said he really liked my car and that it was a very nice car. He was a great guy, a lot of fun and enjoys old cars. It was nice that I had a chance to meet and talk with him.

If you want to know more about the cast, Rob Reiner and the movie “Flipped” there is a website. Type “Flipped” into a search engine and it will come up. It shows all of the actors and staff. At the present time the cars are not on the website. The movie came out in August 2010 and was released on DVD in November of 2010. This was a very special experience with our 1954 Ford Sunliner for the year 2009! THERE’S NOTHING LIKE OWNING A FORD! It has been a great year.