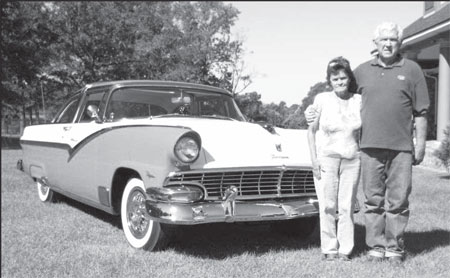 Attached are pictures of my dream car. When I was growing up my parents could not afford a car like this one. I was born in Florida in 1946 so I do remember these cars but as stated my family or friends could not afford the ’56 Crown Vic. When they were new, 1956, the cost for this car was around $2,300. Today to me, it is priceless!

I met my husband Ed in the early 1990’s. He had a 1950 Dodge that he had restored and it was pretty neat. I guess this is when I became interested in old cars, caught it from my husband. We were married in 1998 and endured many struggles but both of us worked hard, set goals, and had dreams. One of my dreams was to own a 1956 Ford, did not have to be a Crown Vic. In 2008 my husband told me to get serious and find a car that I wanted. First he tried to get me to buy a new car, actually a 2010 Mustang. He gave me a choice, “old or new. That was an easy decision for me as I had been looking at the 1956 Ford Crown Victoria’s on the Internet and fell in love, almost as much as I love my husband but not quite.

I was talking to my nephew about this and he told me he knew a guy in Atlanta that was selling one, his name is Bill Grey. My nephew introduced us and I asked Mr. Grey to send me pictures so I could see it. I knew this was the car for me with the first picture I saw. It was exactly what I had dreamed of but never imagined I would find. Remember, we were looking for any 1956 to restore.

When I found out how much the gentleman was asking for the car, I knew we really could not afford it. My husband was in a bad accident, which was not his fault. It took us a full year to get back on our feet. My husband had told me to be patient and we would find a solution that would allow me to have my dream car.

I called Bill Grey, told him that we wanted to purchase the car but could not do so until my husband recovered from his accident. Bill Grey kept the car garaged for several months with my name on it. He had other offers for the car but held it for me. Mr. Grey actually delivered the car to us early June 2010. My birthday is June 6th and I told my husband he did not ever have to buy me anything else the rest of my life. (I mean it, but know he won’t listen).

Now you see why I have a great husband. This car is better than any gold or diamonds.

We had to do very little to the car after we got it. The temperature gauge and oil pressure gauge were not working as my husband thought they should. He told me I could not drive it until the gauges were good and that was like keeping candy from a baby to me.

My husband’s sister told us about a magazine that specialized in antique Ford parts, MACS. We ordered the replacement sensors and other goodies (Ford floor marts, Ford keys and key chain, shop manuals, wiring manuals, 1956 sales brochures, car cover, etc.). My husband installed the new temperature and oil sending units and replaced some of the wiring and the gauges now work perfectly. I also had a special Georgia tag made, “56CRVIC”.

The Fiesta Red and Colonial White are 1956 Ford Colors. My car was originally solid Colonial White. I love the “red and white” and wish mine had been that way when it was born. The serial number of the car is M6UW130422 and the model number is 64A-E-AD-6-M-53802B. It was born a Crown Victoria and I believe the only thing not original is the Fiesta Red paint. The old A.M. tube radio works great as does all the gauges and the heater. The “pedal pump” windshield washer even works. It does not have air conditioning; we just “roll down the windows, open the air vents” and enjoy the country air.

The engine is the original 292 cubic inch Thunderbird edition and has 89,000 miles on it. The “Fordomatic” automatic transmission works perfectly.

I put my car in its first car show last week, (October 9th), in Lyons Georgia and it won First Place, see the trophy on the hood and in my hands. That was like Christmas to me. I could not believe the people that stopped to admire the car and the comments from “older folks” like us. I had one guy try to buy it and another said he was going to steal it. “No way!” to both.

My sister-in-law and I are putting on a car show November 6th, “Oak Park Cruisers”, near Oak Park Georgia. My sister-in-law has a 1939 Ford Deluxe that she and her husband had found and restored to “like new”. We are giving out about 41 Trophies not counting the first 50 entries get a Trophy. We look forward to having a great time but bet we will not see another “Crown Vic” like mine.