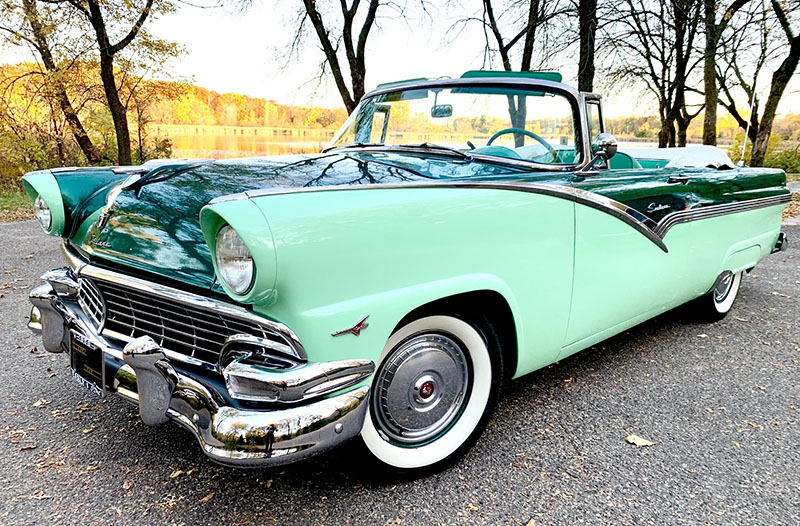 The love and passion my dad, Rick Gannott, had for cars flowed through his veins from a very early age. Growing up, his family owned and operated a Sinclair gas station, and it was here that his love of everything mechanics and cars began. In fact, before he was even old enough to drive, he became a proud car owner. It was 1970, and the engine in the car his brother used for work had given out. Not one to throw anything out, dad saw this as an opportunity! This wasn’t just any car. It was a 1956 Ford Sunliner. Instead of hauling it to the junkyard as was planned, his brother gave it to him as a project. Dad was determined to get this car running and on the road in time for his 16th birthday. Dedicating all his time to this new project as a young teen, he replaced the engine with a 312 and had it back on the road in no time. Unfortunately, the new engine gave out within a month and was replaced with a 292 and a manual transmission. Throughout high school, this 1956 Ford was his daily driver. After graduation, he needed something more reliable to get to vocational school. His beloved Sunliner was put in storage and replaced with a red 1966 Chevy Impala (which he too, of course, kept and ultimately restored).

Although his first car had been in storage for many years, his passion for the project never wavered. Nearly 15 years later, he was finally ready to resurrect his 1956 Ford Sunliner. He was determined to bring it back to its original two-tone green glory. His passion quickly spread through my family. My mom, brother, and I dedicated many nights and weekends to “helping” dad bring his car back to life with a frame up restoration. Apart from the body work and paint, he did all the work himself. He admitted to me a few years later that much of the work he had to do was correcting the work and modifications he had made as a teenager. After it was restored, we spent nearly every weekend creating memories as a family traveling around southern Minnesota attending various cruises, car shows, and parades. The dream he once had as a 15-year-old had turned into to a family affair.

Over the years, this two-toned green Sunliner became synonymous with my dad. People knew him because of his car. Driving and tinkering with this car was his happy place. Shortly after finishing his restoration in 1990, he was proud to make the cover of the Fomoco Times. He was a dedicated, 30-year member of the CVA and attended many National Conventions and Regional events.

Only a few short months after retiring from a 45-year career at Higley Ford in Windom, MN, my dad passed away. His time was abruptly cut short, and he wasn’t able to create the many memories he longed to have with his car and his grandkids. Although his loss has had a profound impact on my family, having this tangible, important piece of my dad’s history is priceless. As the next generation with this car, it has become a priority to care for it just as he did for nearly 50 years. I hope to build upon his passion and the memories he created for my brother and I and form new lasting memories for with my own 2 boys.