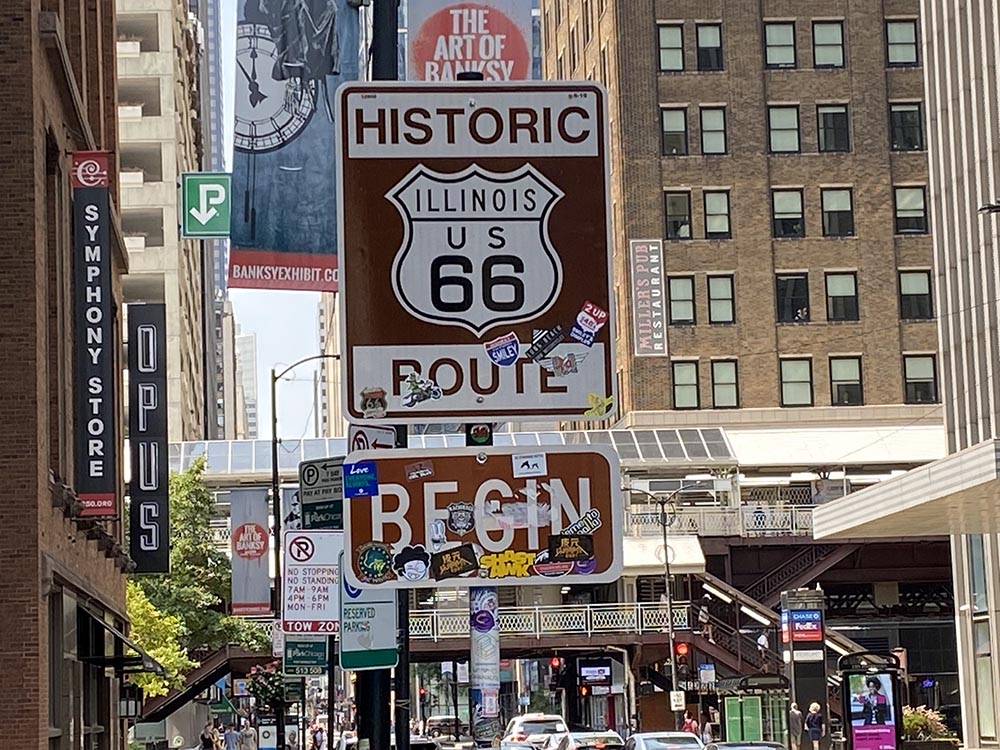 For many years (decades?), I have wanted to drive the “Mother Road”, the Historic Route 66, from its westbound beginning in downtown Chicago to its terminus at the Santa Monica Pier in California. Established on November 11, 1926, Route 66 traverses eight states and over 2,400 miles. US Route 66, the subject of many books and magazine articles, a very popular song and even a television series in the 1950s-60s, was officially deleted from the US Highway system in 1985 after the mostly parallel interstate highway system was completed.

This past September, my brother, Gary, who owns two Studebakers, was going to attend the International Studebaker Drivers Club Conference in Indianapolis. Since Indianapolis is only a few hundred miles from Chicago, I approached Gary about heading north to Chicago after the Studebaker Conference, turning left at the beginning point of Route 66 Westbound, and heading to Oklahoma City for Part 1 of the long drive to California.

Gary was game! I started planning for the approximately 850 mile run from Chicago to Oklahoma City, purchasing 5-6 travel books and some maps specifically on Route 66. Why so many books? Because each book is different and often had gems that were not included in the other books, especially suggestions for iconic places to stop and visit, currently operating old restaurants and motor courts, business hours of establishments, historical information, different maps, etc.

I’m not going to dwell on the books, which I leave for your reading pleasure, except for some “lessons learned” on which books may assist you in your planning if you decide to drive Route 66. Specifically, a few of the books included hand-drawn maps of the local roads ahead. These informal maps proved invaluable because of the additional small detail provided, sometimes at variance with the published maps. However, the hand-drawn maps and the books themselves were not always accurate in providing directions, perhaps due to changes in the highway designations, current road construction and detours since the books were published. Keep alert!

Two popular books are: “Route US 66: Traveler’s Guide and Roadside Companion”, by Tom Snyder, and “EZ66: Route 66 Guide for Travelers”, 4th Ed., by Jerry McClanahan. But there are many more publications to consider. Don’t hesitate to highlight the books with your own notes about the various sites to be visited in days ahead, along with comments about sites you have visited, accuracy of the books relied upon, and corrections to the books and maps.

The internet is a wonderful source of detailed information for a Route 66 journey. Check out a super website, www.Route66RoadTrip.com, which includes satellite views of the Route 66 highway from Chicago to Santa Monica, with Route 66 highway markings as an overlay to the satellite photos. You can see exactly how Route 66 tracks the nearby interstate highways. The satellite photos also reflect information on hotels, restaurants, gas stations, sights to see, etc. Wikipedia has a very good, detailed 23-page history of Route 66 with photos.

Leaving Chicago: By far the most challenging part of the trip was the first day of the journey driving across Chicago. After paying a $40 parking fee for the privilege of parking 30 minutes in downtown Chicago to visit the Route 66 beginning /termination sign, we headed west. Trying to identify Route 66 highway signs on busy Chicago streets in heavy traffic, and changing directions on many streets through commercial and residential areas according to the directions in the books, was quite challenging. This is where a navigator becomes helpful, if not critical, in advising the driver in advance to be on the lookout for certain roads, signs or landmarks, and counting stoplights for turns. Especially while driving in city traffic, the navigator in the passenger seat often has a better view of Route 66 signs ahead than the driver, who is focused on driving safely.

Even with both Gary and me looking for the Route 66 signs on the long trek through Chicago, we missed a couple of them and had to either backtrack to the missed sign or identify alternate directions to rejoin Route 66. Several times after making turns, we would drive a mile or so before picking up the confirming Route 66 signs - - or not! It was much easier identifying the road signs when we got into the rural areas of Chicago and into the Illinois countryside.

Transiting St Louis, MO, on Historic Route 66 posed similar issues as Chicago as it took almost two hours to transit St Louis, rather than taking faster interstate highways around the city. Remaining on the old Route 66 through the big cities can add hours to your driving time for the day. Include that in your planning for places to stop for the night.

Another quirk about driving the Historic Route 66 is that there are often up to three variations of Historic Route 66 signs at an intersection, depending upon which “alignment” and certain specific years of travel on Route 66 to follow, e.g., 1930-1940, 1935-1945, etc. As towns and cities grew, and with improvements in highway engineering over the years, the designation of the roads identified as Route 66 changed through those areas. Even in rural areas, we found several alignments that changed over the years. Most of these multiple variations of Route 66 are not indicated in the travel books and signs pop up without notice on the highway. You have to make quick decisions as to which sign to follow. The good news is that generally any of the alternate routes will bring you back to the prevailing Route 66 down the road to continue your journey.

As for the driving experience of traveling Route 66, for me it took time to adjust to the old highway coursing over narrow, two lane, twisty roads at relatively slow speeds, 55 mph-65 mph for the most part. I’m used to fast traveling on interstate highways designed to get from point A to point B in the shortest period of time. By the second day, however, I was enjoying the more intimate driving experience on Route 66 that brought back many fond memories of family vacations in my youth when my dad was driving on these and similar narrow highways. Dad, mom, four kids, our Doberman Pincher and luggage were crammed into the station wagon. Many times, we drove through the night with snow, heavy thunderstorms, lightning and thunder (us kids loved it!). I remember how difficult it was to pass cars, especially through hilly and mountainous regions, or at night, and traffic would back up. Travel in the 1940s-1960s, before the interstate highway system was downright dangerous in retrospect.

Late September was a nice time to travel on Route 66. The weather was sunny and warm, and we had no rain. Driving through the countryside, the fields with hundreds of acres of crops on either side ready for harvest, or just after the harvest, came down to the ditches along the edges of the roadway. You could almost touch the fields they were so close. The Victorian farmhouses, the old barns and outbuildings, were much closer to Route 66 than those hundreds of yards, sometimes miles, away on the interstate road system. For anyone who likes the stately Victorian mansions of years past, following Route 66 through the towns and larger cities was a real treat. Many of the city streets were lined with stately restored mansions in the full variety of architecture and vibrant colors characteristic of the Victorian Era.

Along the way were many excellent Route 66 Visitor Centers and museums. In particular, Pontiac, IL, has an exceptional Route 66 museum, with several floors of photos, exhibits and memorabilia. Many colorful city murals adorn the buildings near the museum. The staffs at these museums were very familiar with the history of Route 66 in the local area, as well as highway directions. The gift shops at the museums, as well as the motor courts, restaurants, etc., were also very nice.

Another recommendation is to visit with other fellow travelers on Route 66, especially those who are coming from the opposite direction. Ask for traveler tips as to places to visit (or not visit), exchange information about incorrect directions given in the travel books, highway conditions, etc.

We stopped one night in Lebanon, MO, at the famous Munger Moss Motel, founded in 1946. It is well worth staying at the motel just to see the huge completely restored neon sign at night welcoming visitors. It also has a very nice gift shop. Can’t miss it. The delightful owner, Ramona Munger, regaled us with many stories of travelers on Route 66 since she and her husband purchased the motel in 1971. She was celebrating her 50th Anniversary owning and operating the motel, which she does by herself and one handyman.

Ramona informed us that travel by modern cars is the rule, and that she rarely sees classic cars traveling on Route 66 or staying overnight at the old motel. Very disappointing, but we found that to be the case. During the entire trip we only saw a single American classic car, a Model A custom hot rod roadster, driving Route 66 in Oklahoma.

On our last day on the road, we had breakfast at the famous Rock Inn, Stroud, OK, featured in the movie “Cars” and operating continuously since 1939. We also chatted up about 15 members of the British Triumph Auto Club from Edmund, OK, who drove their beautiful classic Triumphs to the Rock Inn for breakfast. From the Rock Inn, we pressed on to Oklahoma City, completing the first part of our journey on Route 66.

The traffic on Route 66 from Chicago to Oklahoma City was very light, probably because the interstate highways were generally within sight of Route 66 and carried the vast bulk of the East-West traffic. We never had a traffic backup on Route 66. During the entire 850 mile trip we only drove 25 miles on an interstate highway, and that was due to an error in a hand-written map in a book that we were following. The rest of the trip was on Route 66, although in many places the original road was replaced with newer road surfaces bearing the Route 66 signs.

It was a great trip, a step back in time, and the slower pace of driving was very enjoyable. Hopefully, Gary and I will finish Part 2 of our journey on Route 66 from Oklahoma City to the Santa Monica Pier in 2022. That trip will be longer and much more challenging.

If you have questions, give me a call, 571-239-0232, or email: This email address is being protected from spambots. You need JavaScript enabled to view it..