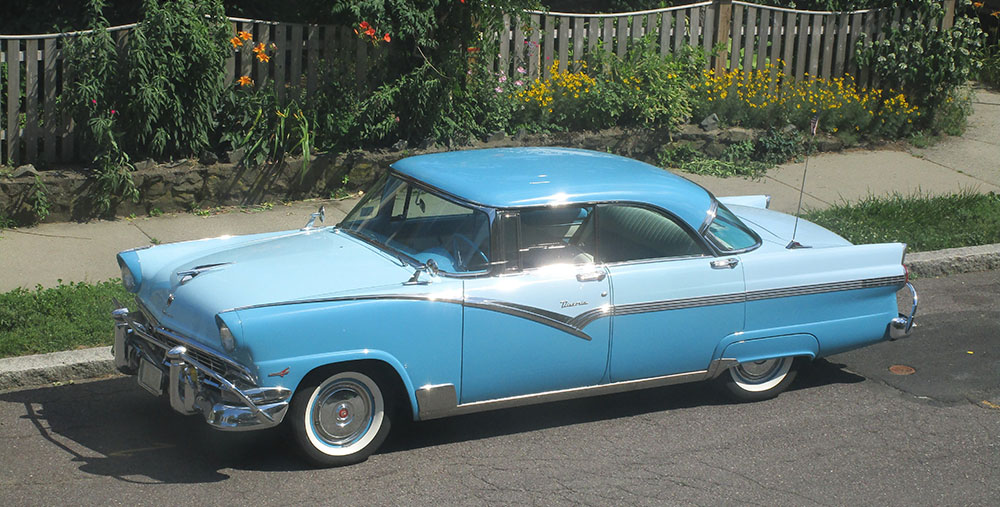 One of my long-time desires was to possess a 1956 Ford frame-off restoration vehicle. My employer had one and I always thought it was soooooo cool. On Columbus Day weekend, 2006, I purchased a clapped out four-door Victoria hardtop for $4,500. With a highly recommended restorer, a 401K ready to bleed, I was aching to take the plunge.

Before reading any further, have a large Mango Pineapple Vodka over Sprite. If you don’t like vodka, go for a six-pack of beer. Then read about what I got for the first part of a $77,000 frame-off restoration.

The car was “finished” in 4 1/2 years. The pick-up date was June 5, 2011. The key was turned. Nothing! Dead battery! It needed a lightning bolt strength charge to be administrated just to get the starter to groan. Once the car was running, it moved very sluggishly outside of the garage. It was a 200-mile ride home. The transmission was slipping but slowly got into driving mode. Smoke poured out of the breather pipe all the way home, using up 1 1/2 quarts of oil. The first engine, a 312,went 724 miles and then was junk. One week or so later, the radiator burst and was unless. Then leaky wheel cylinders followed. Little did I realize that this was just the beginning of more nightmares to come!

Another four years has been spent replacing old parts not replaced or just trying to get things to work. On this list were items like door locks you could not lock, defective tie rod end, missing number plate bracket bumpers, faulty electronic ignition, large space between quarter panel and trunk, improper line-up of seat upholstery, faulty seat track, rear window which had both worn and bent parts to prevent it from being rolled up properly, radio static clip installed upside down, vent window push locks broken, missing pieces for window washer, tube missing and more.

The initial shake down trip was to the CVA Convention in Huron, Ohio. After passing Springfield, MA, very intense and heavy downpours were encountered. Guess what? No wipers! I could only get 1/2 sweep across the glass at a slow creep. Water poured through the windshield on the passenger side filling my shoes with water and drenching the floor. Due to the deluge, a couple of big rigs ran off the interstate onto their sides. I thought it was going to be the end. Boy, did I pray to St. Anthony (the Patron Saint of lost items). “St. Anthony, St. Anthony, come on down. What is lost, let it be found”. (What was lost was my mind)! Fortunately, he answered my stress calls and got me out with my sanity.

How much did this little prize cost to be completely refurbished? The total for the first round was $77,419.36. Auntie’s inheritance is gone. Well sort of! I just have to look outside in the driveway every day. Then the day becomes bright and happy.

Better days certainly are ahead. Since then, the engine, transmission and radiator have all been replaced along with everything mentioned above. I had the second 312 installed in 2012 and it has gone over 7,000 miles without a hiccup. Yes, we are finally getting everything functioning properly but continue to find new defects now and then. So, the latest one-half restoration including the other aforementioned repairs cost over $20,000. This car has actually had 1 1/2 frame off restorations at this point and “I’m Broke!” However, now she runs so well!!

I have been to eleven National CVA Conventions, and lately have helped there with nighttime parking lot security and daytime parking. have driven this car to Huron and Dayton National CVA Conventions. In 2015, I placed second in the judged class. Of the over 100 cars in Dayton, there was only one other four-door Victoria-so they are rare. I have also won three trophies at local car shows.

In summary, I have learned that there is a light at the end of the tunnel (but sometimes it is the headlight of an oncoming train). I have learned that it is cheaper to buy a completed car than to have one built, especially if you don’t know beans about auto mechanics. I learned to be thankful for real help and expertise, including Paradise Citgo Swampscott, MA; Webb Electric of Danvers, MA; Tee-Bird Products; and many others for their “second time around” help. Like my last name, ”Baptista”, I have been baptized in old oil, shot bearings and loose wires.

Yet I have saved a piece of 1950’s Ford history. For that I have earned a throne in Ford heaven. I just hope old Henry will give me the proper respect. I also ask for a pat on the back from other Ford lovers, and two pats if you have had the same tribulations as I have had.

Why does one do a frame off restoration and what is the expected outcome? The purpose of "Going all the way" is to have everything perfect or at least as near perfect as possible so as to avoid any future problems or just plain headaches! Miss Victoria has been in my possession since 2011 and I am finally getting to the end of the "fix it" list so that I have a perfect original car. My endeavors lasted this long only because I am a Taurus (a stubborn bull) with determination not ever to give up until successful. I went to town on the final list after having the vacuum wiper motor rebuilt and windshield washer pump restored.

One major unexpected problem was the electronic ignition which went sour. Of course, I was 50 miles away from home when things began to happen. The engine began to backfire making it necessary to use the breakdown lane at 20 mph several times. The problem seemed to be intermittent and would go away every time over the next two months until one day the car made a loud bang and would no longer start. The time and the place were perfect. The location was my driveway!! It was finally determined the cause of the problem was the electronic ignition. The distribution got fried so that was replaced, and I changed back to points again.

The rug showed much discoloration due to the heavy leaks, so the entire floor rug was torn out. Fortunately, I was able to use an upholsterer within 60 miles to complete the work.

Next project was the headliner. At a local car show in Danvers, MA. there was a Victoria with the original headliner pattern. I sent pictures to a supplier of original upholstery material in Oregon with payment in full. I was assured of prompt delivery, so the seats were removed in preparation. The material never arrived until one year later!! To add to the misery the material was cut incorrectly. The company claimed it was correct but had some ridiculous return policy of 7 days!! Rather than have to order and pay a second time plus another year wait, my upholstery man dismantled the material and reassembled the headliner to make it fit as well as possible. I refer to him as my miracle man. I honestly can't see how some suppliers can remain in business when offering such dreadful service to us history buffs.

The radio and speakers were not correct. I was able to purchase a 1956 radio and have it restored through the help of CVA member Ralph Chadsey. When the radio and reproduction speakers were installed, the ashtray would not close. Keep in mind that there were two types of ashtrays. I discovered that the short ashtray in the 1956 Sunliner closed perfectly in the Victoria. The long ashtray was for a padded dash car with an original speaker (which is not available). With a reproduction speaker only a short ashtray will work. Thanks, Norbert, for a short ashtray, which was repainted and installed.

I thought crash bars would be nice, so on they went. However, I noticed the two front "End Caps" did not look good. One was banged up and the second did not fit correctly. I purchased two "original" used end caps at a convention in Des Moines and had them restored to perfection. I was told that the reproduced end caps did not fit correctly and to make sure "originals" were used. Some members complained that they were so frustrated with the reproduction pieces trying to make them fit that they ended up in the trash.

The final headache was to find a rasping noise in the windshield area whenever on a rough road. Seemed like the noise would disappear during hot weather. Cooler weather brought back the noise louder than ever. After searching and moving dash parts, putting in rubber bumpers, etc., with no success the final alternative was to kick out the windshield and reseal the whole business. Guess what? After 10 years it was a success!!

Now What? My fix it list has ended and there is nothing more to worry about. I actually feel a little bored at this point but very thankful that another 10 years will not be spent trouble searching for solutions. Time to smell the roses!!

In spite of such a difficult fix list facing me, I enjoyed driving "Miss Victoria" to Lexington, KY, Grand Rapids, Michigan, and Buffalo, NY without any problems. Those experiencing hard luck with their cars, do not "Trailer Queen" your lady. Drive her to find out the problems so she will be a reliable driver. Hopefully those who have restored their cars will not have to suffer through the expense of a second restoration like I have.