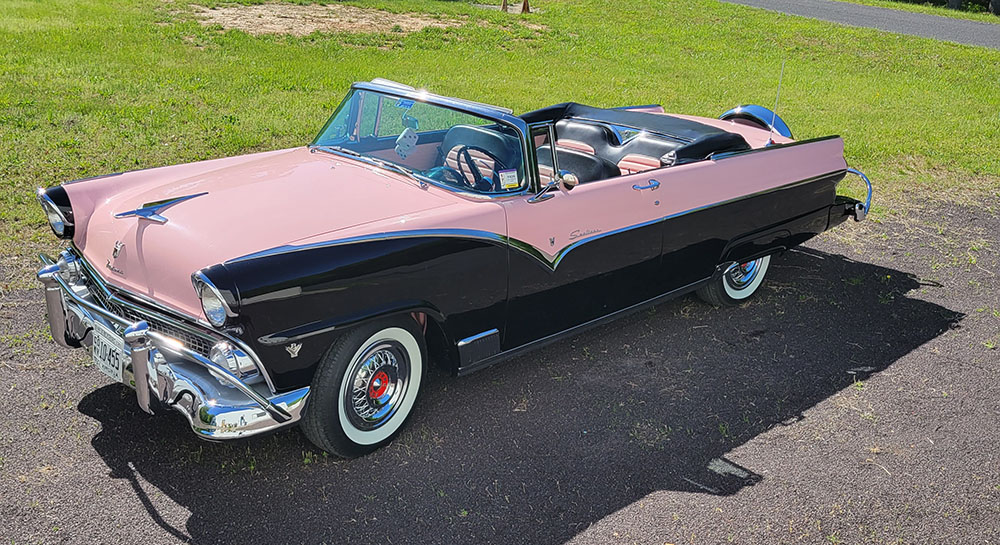 Is it love or obsession? Whatever, it began 55 years ago when at the age of 15, Hoppy bought his first 1955 Ford Sunliner Convertible from his friend Joe Smoot for $100. This was his everyday driver car, which was a Snowshoe White exterior with Mountain Green and White interior. This car was driven for quite a few years until the “kids” messed it up.

If you know anything about Hoppy, back in the day, there was always swapping and trading of vehicles and engines; sometimes on the same day you bought one, and this happened on more than one occasion among friends.

About two to three months after the first 1955 purchase, Hoppy picked up a 1955 Ford Steel Top Crown, again for the bargain price of $100 at a junk yard. Another daily driver car that had exterior colors of Tropical Rose and Snowshoe White. Hoppy drove this one until he finally sold it and bought his favorite car.

Yes, everyone knows, Hoppy’s favorite car ever purchased in 1971 is his 1955 Ford Crown Victoria Glasstop with exterior of Torch Red and Snowshoe White. This purchase was made from a Volkswagen dealership in MD for $295, and became a daily driver for him and Kathy. (We will do another story on this beauty later and the 2 restorations and final full frame- off restoration)

Finally, after several 1955 convertibles in Hoppy’s possession, Hoppy and Bill Lindsey made a trade, and a 1955 Ford Sunliner Convertible came to Locust Grove, VA in 1992. More on this in a minute…

Also, in 1992 Hoppy made another purchase, and his Nationally known 1956 Ford Fairlane (aka “Just For Kix” or “Snake Car”) Yellow Pro Street Car was purchased and restoration completed in 1993. (This may also be another story later.)

Meanwhile back to the convertible purchase from Bill. In 1998, a full frame-off restoration began. The car did not go to the body shop until the end of January 1999. Some of the CVA attendees at the June 1999 All Ford Carlisle PA show were looking at some of the photos of the restoration process and inquired if the car would be ready for the 2000 CVA Convention. Hoppy’s response was “No”, “it would be at the 1999 Convention”.

Even with the busy time for Hoppy’s excavating business, it was literally finished with final parts assembled the night before leaving, and washed the morning of leaving and driving to the August 1999 CVA National Convention in Burlington, Ontario, Canada. I believe that is how all restorations, assemblies, and completions must be with these Ford guys!

The pink and black beauty is a 1955 Ford Sunliner Convertible with exterior colors of Coral Mist and Raven Black, and interior to match, and is an attraction gatherer especially among the ladies, prom attendees, and car cruise-in attendees. She is pretty underneath with her Coral Mist underbody and black frame. Top up or top down, she has seen heads turn at her beauty. She definitely attracted Hoppy’s 2nd love, Tonda, as a photo of him and Amber, the oldest granddaughter, was the first photo of Hoppy that Tonda ever saw of him. (That is another story you will have to ask about!)

Today, you will find us enjoying life in a Ford somewhere; be on the lookout near you!