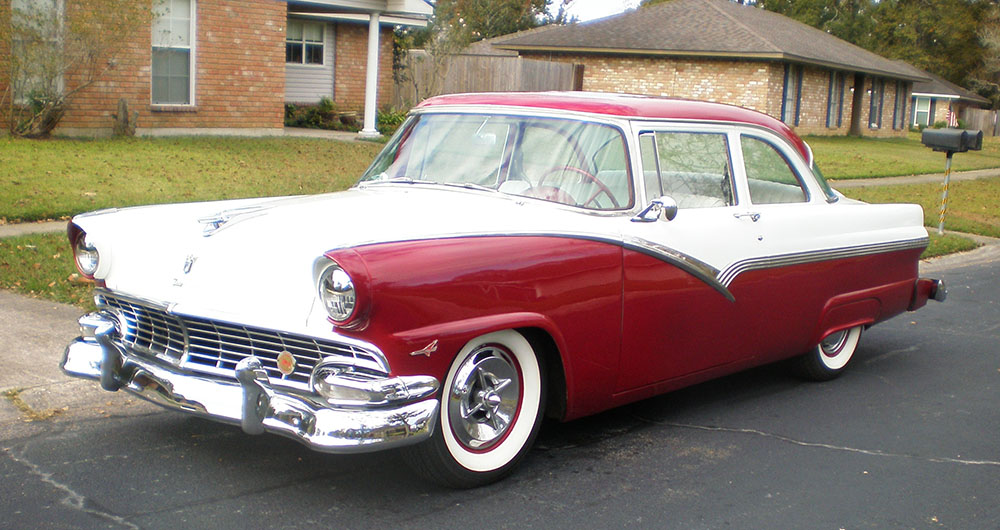 Not Stock and Absolutely Stunning

Although not an "original" restoration, all the ornaments and emblems are there thanks to Dennis Carpenter products. Many items were purchased from Carpenter and Mr. Brown Small, who both advertise in the CVA magazine. A special thanks to Brown Small for many hard-to-find pieces and last-minute parts that were sent quickly when needed. The body work, paint, interior and detail work were performed by a new local old car business, that I refer to as the Three Bills. The owner, body man and interior man are all named Bill! Bill and Bill, who now work with Bill have previously done work on our '51 Mere and '51 Victoria.

We previously attended the National Show held in St. Louis (without a car], and plan to attend in the future with this ''back to the future Club Cruiser".

January 2021 UPDATE:
Our ’56 Fairlane was on the cover of the August 1998 CVA “FOMOCO Times”. It had just been painted Ford Laser Red and Crystal White. We purchased it in 1990. This was my wife’s, “Marta’s car”. She was able to enjoy the Fairlane for ten years, after the body work. She occasionally drove it to the high school where she taught. Marta passed October 8th, 2008.

The paint is still great and very bright, and hard to capture in a picture with my camera. The engine was rebuilt in 2012. The engine is a 292 (not the 312 it was supposed to be) and bored now to be a 296 (.030 over). Runs great and recently drove it to St. Louis to be in my Niece’s wedding, and then to the James Dean Run in Fairmont Indiana.

I belong to the CVA, Y-Block Magazine, ’49-’59 Ford Mercury Association, KKOA, KOA and AACA (see the Driver Participation Badge award on the grille). I included a copy of the August 1998 “FOMOCO Times” cover, and two pictures of the Fairlane.