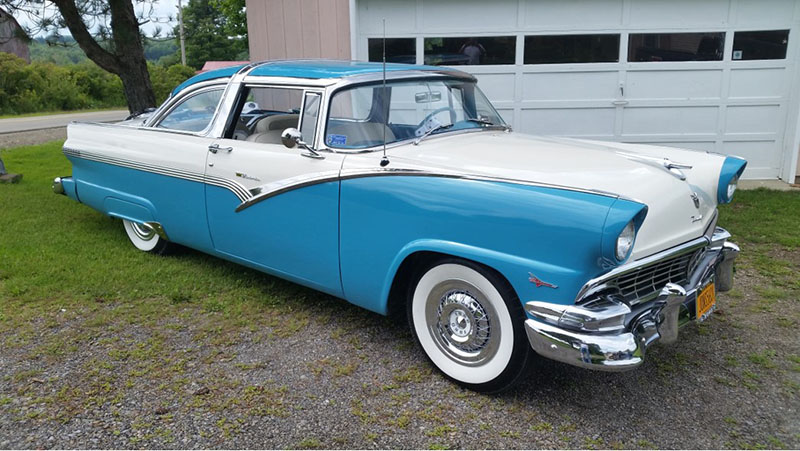 My first encounter with 1956 Fords was when my dad bought one. I was ten years old. It was a Country Sedan station wagon. My dad gave this car to me eight years later. It was my first car to drive, it needed body and motor repairs. I got it on the road after four months of work in time for my high school graduation. Later that fall returning from stock car races I blew a right front tire and found the ditch. The car didn’t come out of this encounter well.

Needing a replacement car, I cruised the used car lots. I spotted a peacock blue 1956 crown Vic at Walt’s car exchange. After begging for the money to buy this I finally got it home. I had two minor body incidents I sold this car. My next vehicle was a 1959 police interceptor, which I drove until I went into the army from 1966-1968.

Fast forwarding to1993 some buddies of mine talked me into getting into restoring a 56 Ford Fairlane Victoria. I bought two cars, one 1956 Ford Fairlane Victoria, and a 56-sedan car for parts. The 56 two door Vik hard top had been used for drag racing in Ohio. Several months later, and lots of late nights in the garage my 56 black Victoria was road ready. I had restored it to its original color and body style. It did not have the original 312 Y-block motor and transmission. Irene and I drove it to the Detroit convention, and later to the convention in Sandusky, Ohio. We also did several local shows and just enjoyed going for drives in it.

Nineteen years later I still dreamed of having my own Crown Victoria. I was intending to take off the top of black Vicky and make my car into a cloned crown. I was having trouble finding a 56 crown that I could use the roof and crown parts. I found a 56 Crown Victoria for sale on the internet. It was in Bristol Tenn. We got in the truck, drove down and rented a trailer. Oh boy what a mess. It had been stored in a shed for over forty years and was not a pretty sight. Tires shot, brakes frozen, body well rusted. What had I gotten into? After an hour and a half of work with his tractor we got it loaded. This was in January. Got almost all the way home before it started to snow. We live in Western New York where we get lake effect storms.

Trying to get it unloaded was just as much of a chore. We had to pull it off with my tractor and have a wrecker push it into the garage. I had just retired at 65 and decided I wanted to do one more restoration instead of the clone job. The whole car was completely disassembled and then restored to its original beauty with all parts replaced or refurbished. We had many road trips getting bits and bigger pieces. I spent a lot of time on the internet hunting for parts. I used many different parts catalogues looking for them. We went to Conn. for a transmission and engine. A trip to Carlisle for bumpers refurbishing. We left the bumpers with a guy from Texas who later shipped them to us. I did ninety percent of the restoration myself, including the interior, but needed assistance with some of the body work.

After about 18 months she was road worthy again. One of our first outings was the world Series of Cars in Jamestown, NY. We took second place in our category. During the restoration we were still driving the 56 hardtop. Now that the crown was done, I had to sell it to offset some of the cost.

We enjoy going to car shows. A favorite is the Strawberry Festival at Merritt Estate Winery. It’s held in June every year. We like to do the drive around Chautauqua Lake every July and attend other local events. Just like any other worthwhile project you always need to be taking care of and fixing the things that need attention. This past year in 2019 we attended the convention In Buffalo. This one was close to home for us. We received our twenty-five-year pins for being members of CVA.